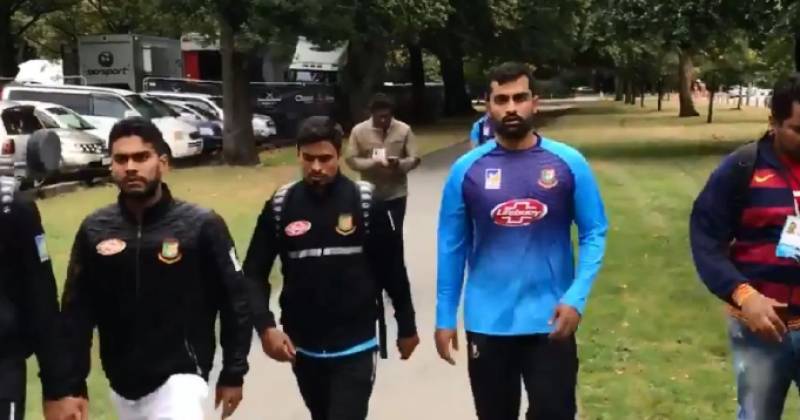 DHAKA/WELLINGTON – All the players of Bangladesh's cricket team, who escaped a fatal shooting at a mosque in New Zealand on Friday, would fly home soon, said the president of country’s cricket board.

"Our players are all at the hotel and are safe,” said Bangladesh Cricket Board (BCB) President Nazmul Hassan, confirming the cricket team narrowly survived the attack.

At least two Bangladeshis were killed and four to five others injured in the attacks happened at Al Noor mosque, located in central Christchurch and another in the suburb of Linwood.

Entire team got saved from active shooters!!! Frightening experience and please keep us in your prayers #christchurchMosqueAttack

Wicketkeeper batsman Mushfiqur Rahim tweeted that the team was "extremely lucky" and he "never wants to see these things happen again".

Alhamdulillah Allah save us today while shooting in Christchurch in the mosque...we r extremely lucky...never want to see this things happen again....pray for us

Bangladesh team manager Khaled Mashud says they were 50 yards away from the Al Noor mosque in Christchurch when a gunman entered and started shooting people in a well-planned attack.

The Bangladesh team were planning to visit the mosque before the start of their third Test against New Zealand, which was due to begin in Christchurch at the Hagley Oval on Saturday.

None of the Bangladesh players or staff were injured, but Mashud said: "We were very close to the mosque, and we could see from the bus. We must have been about 50 yards from the mosque.

"I would say we were really lucky. Had we reached even three or four minutes earlier, we probably would have been inside the mosque.

"This could then have been a massive incident. We are very thankful that we weren't caught in the crossfire, but what we saw was straight out of a movie scene. We could see bloodstained people staggering out of the mosque.

"Maybe in about eight to 10 minutes, we were all inside the bus and were sitting with our heads bowed, just in case someone fires at us."

The third and final Test between Bangladesh and New Zealand in Christchurch has already been cancelled.

Bangladesh Cricket Board (BCB) and New Zealand Cricket (NZC) has been made to cancel the Hagley Oval Test after a joint discussion.https://t.co/PzVjW4qBFy

Arrangements are now being made for the Bangladesh team to return home as soon as possible.

"We've cancelled the game," said New Zealand Cricket chief executive David White. "I've spoken to my counterpart at Bangladesh cricket - we agree it's inappropriate to play cricket at this time.

"Both teams are deeply affected. As a country, we'll have to look at [security of visiting teams]. It seemed to be a safe haven. I'm sure all of New Zealand will take a look at their approach."

The International Cricket Council says it "fully supports" the decision to cancel the match.

I blame these increasing terror attacks on the current Islamophobia post-9/11 where Islam & 1.3 bn Muslims have collectively been blamed for any act of terror by a Muslim. This has been done deliberately to also demonize legitimate Muslim political struggles. https://t.co/5bBREoayLz

"This reaffirms what we have always maintained: that terrorism does not have a religion. Prayers go to the victims and their families."

Jacinda Ardern, the Prime Minister of New Zealand, confirmed 49 people were killed and nearly 50 others injured during the attacks.

The person who has committed this violent act has no place here. To those in Christchurch; I encourage you to stay inside and follow the instructions of @nzpolice. The Police Commissioner will be making a public statement at 5pm. I will update everyone again later this evening.

Three men and one woman were held in custody following the attacks, while a number of improvised explosive devices strapped to vehicles were made safe by police. One male has since been charged with murder.