Satirists around the country feel outdone on V-day 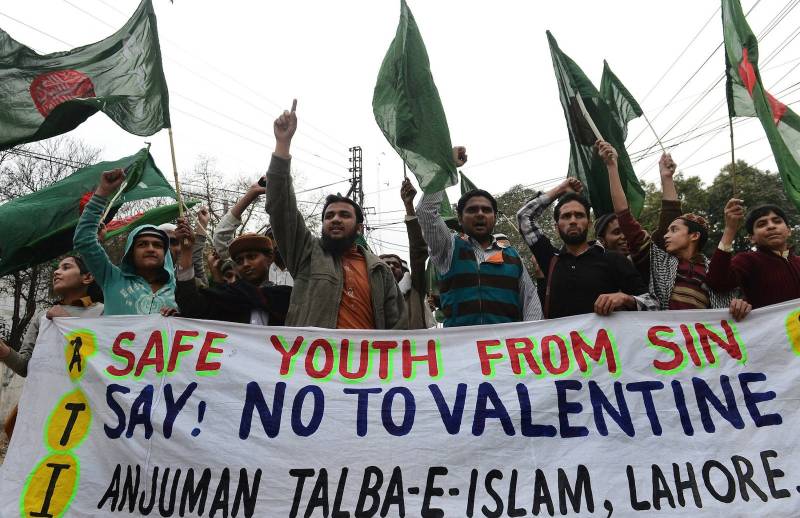 February 15: News bureaus across Pakistan held emergency meetings all of yesterday as established and struggling satirists alike reported “laying their pens to rest” after coming to terms with the country’s reaction to Valentines Day.

February 14th and its place in Pakistani culture has often sparked heated exchanges on the comments sections of news websites. However, this year the day was marked by an upturn in more traditional forms of “activism”.

Numerous district authorities banned all forms of celebration leading up to Valentines Day. According to sources, they agreed that it was only appropriate for Pakistani’s to “mourn” while the rest of the world rejoiced over “sinful love”.

On February 13, the President Mamnoon Hussain declared that Valentines Day had no connection with Pakistani culture, a move that won him praise in important circles. “Mamnoon sahib has shown that he can live up to the tradition of his predecessors. He jumped in where he was most needed, and he did it unexpectedly and without invitation,” said professional know-it-all, Oreo Maqbool Jaan.

A day later, news desks across the country were flooded with reports of boys being jailed for holding flowers, families being fined for entering restaurants with Valentines Day deals, and a street vendor in Peshawar having all his heart-shaped balloons popped by the passing “Haya Day” procession that was organised by friendly neighborhood watch association, the Islami Jamiat-e-Talaba.

According to sources in the editorial teams of various newspapers, this constant “onslaught” of incredulous news had satirists reeling. Nadeem F. Paracha was reported to have said that he now “knew” why religion was the opiate of the masses.

TV satirists also found it difficult to cope with Valentines Day, said a spokesperson of the Pakistan Broadcasters Association speaking at a press briefing, titled “14/02: The Aftermath”.

Also speaking at the event were the creators of Banana News Network, who admitted they were relieved their show had been cancelled before 14/02 as they wouldn’t have been able to stomach such a big “kela”.

According to the organizers of the briefing, Dr. Younis Butt, creator of “Hum Sab Umeed se Hain” was also scheduled to speak at event. However, he cancelled last-minute saying, “mein ab kissi umeed se nahin raha”.

Even satirists with fledgling careers reported to have lost faith in the craft. Daily Pakistan’s Zeeshan Iftakhar has resigned despite being only two article down. “I never thought I’d be outdone by people who weren’t even attempting to be satirical,” he said.

However, another of Daily Pakistan’s struggling satirists, Ahmad Durrani, was more encouraging about the situation. “Sure, it sucks that some people can be so effortlessly absurd,” he said. “But I’m putting something together, hoping to take something away from the entire episode. Let’s see if it gets any traction.”