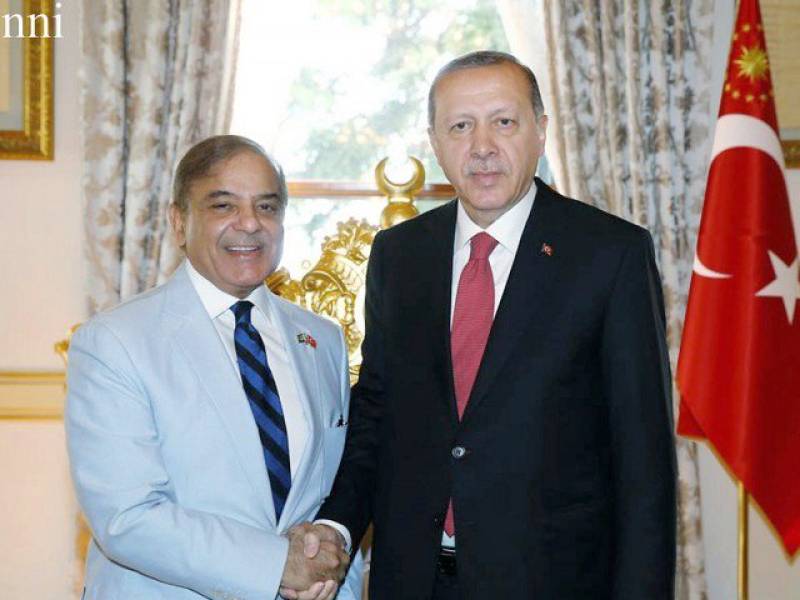 Upon arrival, Chief Minister Shehbaz was given warm welcome at the Ataturk Airport where Turk officials, as well as Pakistan’s ambassador to Turkey, received him. Talking to Shehbaz Sharif, President Erdogan said that his visit was a matter of delight and honour for him.

“I am really happy to meet with my brother again. We want to see Pakistan politically, economically as well as security-wise fully strengthened,” he said, adding that Turkey would continue its unconditional cooperation with Pakistan. “Whether it’s a difficult time or the moment of ease, we are standing with Pakistan,” he said.

He said that the projects initiated in collaboration with Turkey in Punjab were vivacious symbols of Pak-Turk friendship. “Under your leadership, the journey of development and prosperity is commendable and efforts of Pakistan government for the provision of energy as well as the eradication of terrorism are worthwhile,” he said.

The Turk president also enquired about the health of Begum Kalsoom Nawaz and prayed for her health. Talking on the occasion, Shehbaz said that he was thankful to the Turkish government as well as President Erdogan for his warm welcome. “Pakistanis are proud of their friendship with Turkey,” he added.

“Pakistan and Turkey have always sided with each other and they will also be standing side by side in every situation in future, as well,” he said.

He said that the projects initiated in cooperation with Turkey in the Punjab province have helped to improve the quality of life of the common man. He said that the Turkish leadership has set a unique example of public service with their performance. “We are especially thankful to Turkey for its cooperation in wastewater treatment, transport and solar energy sectors,” he said.

Turk Commerce Minister Nihat Zeybekci also called on the visiting chief minister and discussed different matters of mutual interest including promotion of Pak-Turk relations and extension in bilateral trade-cooperation. Shehbaz performed his Friday prayer in a mosque of Besiktas area of Istanbul and made a special prayer for Muslims as well as the salvation of the Rohingyas from the difficult situation.

Shehbaz also held a detailed meeting with Turkish Health Minister Dr Ahmet Demircan. During the meeting, it was assured by the Turkish side that all-out cooperation would be extended to the health sector and it was agreed to have close cooperation in motor-bikes ambulance programme, training of nurses and extension in health insurance.