Pakistan to stand by Kashmir’s right of self-determination: Maleeha Lodhi 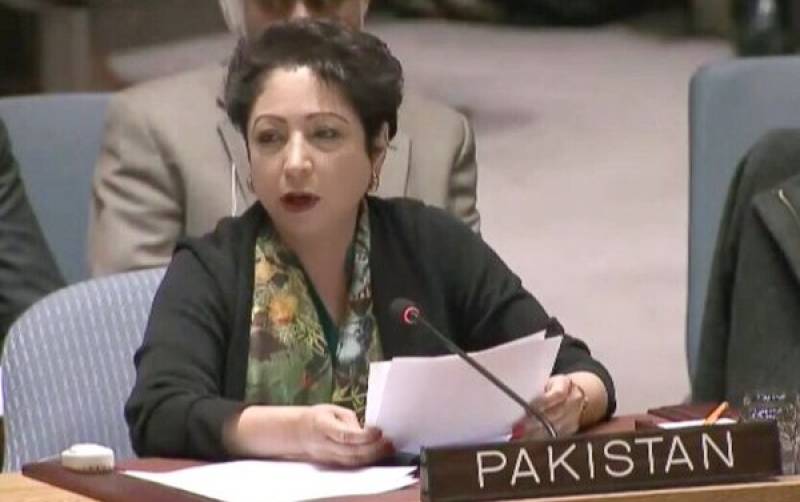 NEW YORK - Reaffirming Pakistan’s continued support for Kashmiri people’s UN-pledged right to self-determination, Ambassador Maleeha Lodhi told a large gathering of Kashmiri and Pakistani community members to step up their efforts to build up greater understanding about their valiant struggle among American people.

Presiding over a meeting organized by the Consulate General of Pakistan to mark Kashmir Solidarity Day, she said the efforts of the Pakistan government and its Mission to the UN must be complemented by the community members in spreading the word about the grave situation in Kashmir where Indian occupation forces are attempting to suppress their popular uprising for freedom. Hundreds of people have been killed and maimed and since July dozens have been blinded by the use of pellet guns.

Ambassador Lodhi briefed the audience about the steps taken by Pakistan for the resolution of Kashmir dispute on the diplomatic front. Prime Minister Muhammad Nawaz Sharif had recently raised the issue with the new UN Secretary-General Antonio Guterres when he met him in Davos recently.

The prime minister had urged Guterres to take steps to resolve the issue as it was U.N.’s responsibility to promote peace and stability. He had also highlighted the issue in his address to the UN General Assembly during his visit to New York in September when also met the former UN chief Ban Ki-moon.

A dossier on Indian atrocities in Kashmir was also handed over to Ban who was visibly moved when he looked at the pictures.

On her part, Ambassador Lodhi said she had highlighted human rights violations in all the forums of the United Nations and had even spoken to the President of the UN Security Council, which had passed several resolutions granting the right of self-determination to the people of Kashmir.

She had also meet the High Commissioner for Human Right, Zeid Ra’ad Al Hussein, to press for Pakistan’s demand for the dispatch of a UN mission to investigate human rights violations in Kashmir. The Pakistan Mission, she said, was also watchful against sinister attempts from various quarters to reduce the importance of the issue.

“Until Kashmir is liberated from Indian occupation, our moral, political and diplomatic support to the Kashmiri people will continue,” Ambassador Lodhi said.

MNA Nafisa Shah told the gathering that there was complete consensus on Kashmir in Pakistan’s parliament and its elected members speak with one voice on the issue. She read out a resolution adopted by the National Assembly reiterating its support to the people of Kashmir.

Ms. Shah said the UN Security Council resolutions on Kashmir remained alive and must be implemented.

Consul General Raja Ali Ejaz urged the audience make contacts with American politicians, lawmakers and common citizens and apprise them of the situation in Kashmir. Such an approach would build up support for the cause of Kashmir.

Capt (rtd) Shaheen Butt, head of the Kashmir Mission and Rohail Dar, president of PML-N, USA, called for unity among the ranks of Pakistanis which will of great help to the cause of Kashmir. Other speakers, including Kashmiri activist Malik Nadeem Abid, offered a number of suggestion to further strengthen the case on Kashmir.

A documentary on the grave atrocities committed by Indian security personnel against the people of Kashmir was screened at the start of the meeting. –APP