Saudi company to invest $4 b in Pakistan's renewable energy sector 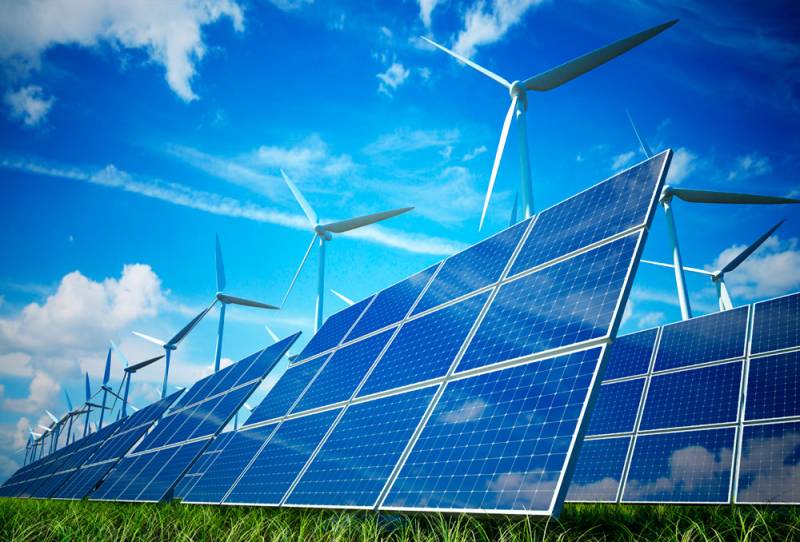 The intention to this regard was expressed during a meeting between a Saudi investors' delegation led by ACWA Power Chairman Mohammad A Abunayyan and the Pakistani side headed by Minister for Finance Asad Umar here at the Board of Investment (BoI).

Speaking on the occasion, Mohammad A Abunayyan said the ACWA Power was a developer, investor, and co-owner of a portfolio of power generation and desalinated water production plants in countries in the Middle East, North Africa, Southern Africa and South East Asian region.

He said his company was keen to invest in Pakistan's energy sector, particularly in renewable energy as there was a huge investment opportunity for production of cheap energy to fulfil the growing local demand.

Welcoming the Saudi delegation, Finance Minister Asad Umar lauded the beginning of renewed relationships between Pakistan and the Kingdom of Saudi Arabia.

He said the existing bilateral economic relations did not reflect the true potential. However, after the visit, a huge investment was expected from Saudi Arabia which would help further strengthen the trade ties between the two countries.

He said the Saudi company had excelled in advance solar power technology and they were keen to invest in Pakistan's renewable energy sector to help reduce its reliance on expensive energy sources.

The minister said now the prices of renewable energy technology had also come down, which would help produce cheaper energy in the country.

"Pakistan has been facing the crisis of current account deficit for a long time mainly due to the import of huge quantity of petroleum products to fulfil the country's energy requirements," he said. With the establishment of an oil refinery with the help of Saudi Arabia, Pakistan would be able to overcome the crisis as it would save foreign exchange, he added.

He said currently the government was the only buyer and seller of energy. Pakistan was opening its energy market for foreign investment to minimize its reliance on costly energy mix, he added.

"We have planned to increase the ratio of renewable energy in our existing energy mix from 4 per cent to 30 per cent to over by 2030," he said.

The minister said the Saudi company was one of the world's leading firms in renewable energy and it would help Pakistan in installing state of the art solar energy technology.

Pakistan's energy generation would go up to over 55,000 MW in 10 years which would need huge investment, especially in the renewable energy sector, he added.

"Power generation sector requires around $38 to 40 billion, transmission sector $7 to 8 billion and the distribution sector $8 billion over the next 10 years," he remarked.

He said CSP was an advanced technology in solar energy production and the government would negotiate with the Saudi company in that regard.

He said the government was bringing the policy to shift in its energy mix with the addition of renewable energy and the sector had greater investment opportunities.

He said up-gradation of renewable energy technology would help provide cheaper energy and reduce reliance on expensive energy mix comprising of oil and gas and was consuming huge foreign exchange reserves of the country.

Talking to media, Advisor on Commerce Abdul Razzak Dawood, also underlined the importance of investment in the renewable energy sector. It was was essential to bring the energy cost down as it would make the products made by the local industry more competitive in the international market, he added.

He said Pakistan was looking to build a long term relationship with ACWA Power and make it fruitful for both parties.

BoI Chairman on the occasion said during the visit agreements of around $10-15 billion would be signed between the two countries in different sectors.