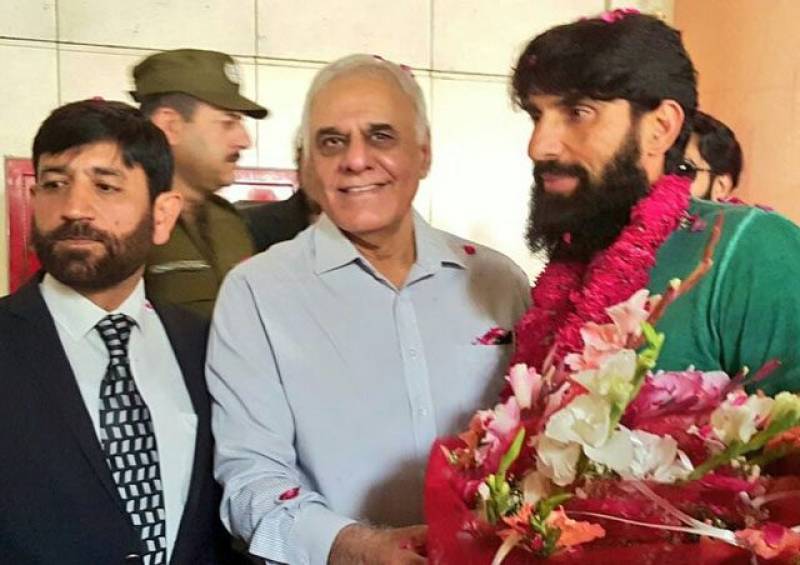 LAHORE - Misbah-ul-Haq arrived in Pakistan on Wednesday at the Allama Iqbal International Airport and was greeted with full excitement by the fans. Misbah ended his career on a high by leading to a 2-1 Test series win in the Caribbean. As soon as he arrived at the Airport, he was greeted by rose petals and loud cheers. Misbah was received by his family and PCB officials.

“It’s an honour for me,” Misbah expressed his gratitude towards his fans. “I am happy with my performance. Winning in the West Indies will be something I will always remember,” the former Test captain said.

“The credit for this accomplishment goes to the Pakistan Cricket Board, the players’ families, and the whole team,” he added.

Talking about his recent success, Misbah said, “We have accomplished a feat many teams across the world only dream of. These sort of victories will help bring fresh talent into the spotlight. It is crucial that we keep succeeding like this, I’m grateful to the nation for all their prayers and support.”

Pakistan had clinched a nail-biting Test match with six balls to spare and went on to win the series for the first time on West Indies soil, making it a perfect farewell for the captain and Younis Khan as well.

“I am thankful for myself, the team and all supporters of Pakistan cricket that we were able to pull it off,” Misbah said after the match.

Politicians and fans went haywire on social media to congratulate the Pakistan legend after their historic series win. ‘ThankYouMisbah’ trended on social media. Pakistan Super League champions Peshawar Zalmi called it the ‘end of an era’.