Some stranded Pakistanis in Kuwait to fly tonight; rest on Sunday: FO 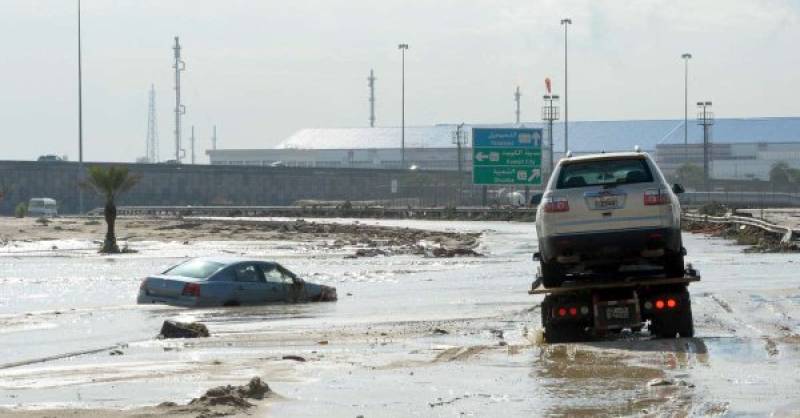 ISLAMABAD - The Foreign Office Spokesperson Saturday said that some of the Pakistanis stranded at Kuwait airport owing to cancellation of flights to Lahore were issued boarding passes on the day while rest would be accommodated by the airline on Sunday.

Due to heavy rains, the Gulf country declared an emergency for three days and its airport suspended operations for few hours on Thursday. At least 70 Pakistani passengers transiting through Kuwait were stranded due to cancellation of Kuwait airlines flights to Lahore.

On receipt of information, an embassy team was sent to the Airport to get in touch with Pakistanis and provide immediate assistance, Mohammad Faisal said on Twitter.

As a result some passengers were issued boarding passes for the flight leaving for Lahore tonight. Remaining would be accommodated tomorrow, inshaallah (3/3)

Severe floods first hit Kuwait less than a week ago, killing one person and leading the country's minister of public works to resign.

Videos posted by people in the area show flooded roads and vehicles being swept away by strong water currents.

The cabinet suspended work in all government offices and schools and the state-owned Kuwait Petroleum Corporation (KPC) gave its non-essential employees a day off on Wednesday, Reuters reported. Kuwaiti Public Works Minister Hussam Al-Roumi resigned on Friday due to the damage caused to public property.

Operations were also suspended at the country's biggest seaports amid “heavy rains and low visibility”, according to the state-run Kuwait News Agency (KUNA).

During those storms, almost 30 milimetres (1.2 inches) of water fell in a 24-hour period, the Khaleej Times reported.

With its typically dry and arid climate, Kuwait doesn't have the infrastructure to adequately handle heavy rainfall.

It's one of many countries in the Middle East struggling to respond to unexpected weather events.

Other countries have also recently been affected by heavy rains and flooding, including Tunisia, Qatar, and Jordan.