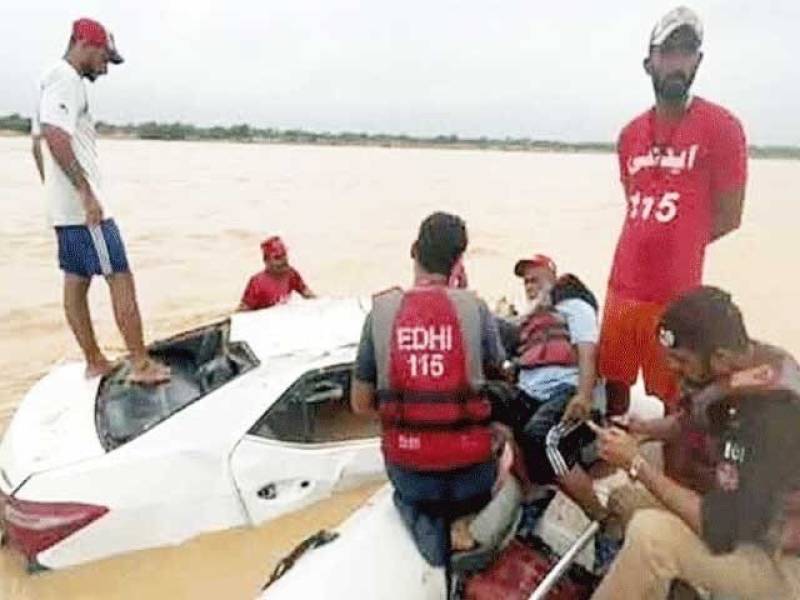 KARACHI – The bodies of the two children, that were swept away along with their family members in ferocious flood waters, were recovered in the provincial capital.

The spokesperson of the rescue organization confirmed that the body of Mohammed Moosa, 10, and Hamna, 7, has been recovered.

Officials said a search operation for other missing people was underway after a vehicle was swept away by a flash flood into the Malir River on Wednesday night.

Karachi police said the car has been pulled out of the river, saying search operation was being jointly carried out by cops and rescue personnel.

A man, his wife, four children and their driver was travelling to Hyderbad from Karachi when it was hit by the flood on M9 Link Road, the 20km two-lane road that connects Super Highway M-9 and National Highway N-5.

Rescue teams have found the car on the bank of the Malir River, two to three kilometers away from Karachi's Link Road while search for the seven people is underway.

Meanwhile, the Met Office has predicted more rains in Karachi and issued an alert for urban flooding. It said that that the port city is likely to receive light to heavy rains today.

On the other hand, a recent spell of rain has killed 13 more people in Balochistan, taking the overall death toll to 209 in the province.

Authorities said that seven people lost their lives after the dam was damaged in the Pashin district.

ISLAMABAD – Federal government has imposed ‘Monsoon Emergency’ in the rain and flood-affected areas ...