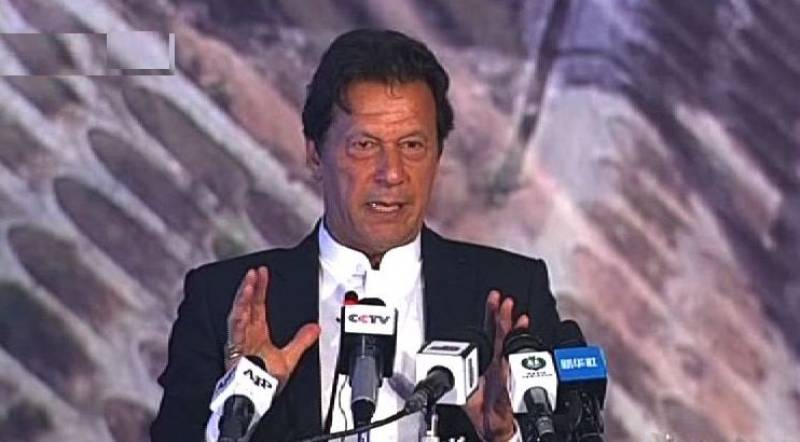 ISLAMABAD – Prime Minister Imran Khan on Monday vowed not to curtail the ongoing accountability drive, saying will not spare any person who looted national wealth.

Addressing the inauguration ceremony of Havelian-Thakot section of Hazara motorway project, the prime minister said that the drive will continue until the justice prevails.

Talking about the JUI-F led Azadi March, he said that it was a circus staged by opposition parties to avoid the accountability. He added, “Those who feared arrest because of corruption were gathered on the container with the Maulana Fazlur Rehman”.

Calling himself a sit-in expert, the premier said: "By now, you all perhaps know who is the expert of Dharna in Pakistan. In the beginning, I told them if they manage to spend one month on the container, I will agree to whatever demands they have," said Khan.

"We spent 126 days on a container. A few of my party members were worried but I told them not to worry as I know what is container and Dharna. You can spend 126 days only if your efforts are based on an ideology."

Referring to the JUI-F chief, the prime minister said, "A person who calls himself Molana is doing all this to avail personal agenda. If today, someone gives Molana Fazlur Rehman some money and ask him to declare fatwa of their choice, he will do it".

On Nawaz Sharif's ECL case, He said: "We accept the decision announced by the court".

He revealed that his cabinet was not ready to allow Nawaz Sharif to go abroad for treatment. “I allowed him [Nawaz] by showing mercy”.

Criticising PML-N President Shehbaz Sharif, the premier said that he [Shehbaz] started “drama” when he was asked to submit indemnity bonds worth Rs7 billion as a guarantee that Nawaz will return to the country after being healthy.

The prime minister said that CPEC would create jobs for youth, adding that ensuring speedy completion of CPEC to bring prosperity to Pakistan.

He said that the Chinese will share technical skills with Pakistani youth. "We have the largest youth population and this youth will become our strength".

The motorway is part of the China Pakistan Economic Corridor project. The project will serve as the main route for Pakistan-China commercial traffic, reported Radio Pakistan.

The motorway will also greatly boost tourism as it will provide access to Mansehra, Naran valley and Gilgit Baltistan.

The premier will open Havelian-Mansehar motorway tomorrow while its inauguration ceremony will be held on Friday at 3pm near Havellian interchange.

Federal Minister for Communication Murad Saeed, Azam Swati including important ministers, members of parliament, diplomats and dignitaries will be attended the ceremony.

According to the communication ministry, the Havelian-Mansehra section is the part of CPEC under the Havelian Thakot project on which Rs138 billion will be spent.

Authorities said that the remaining project up to Thakot will be completed until February 2020.