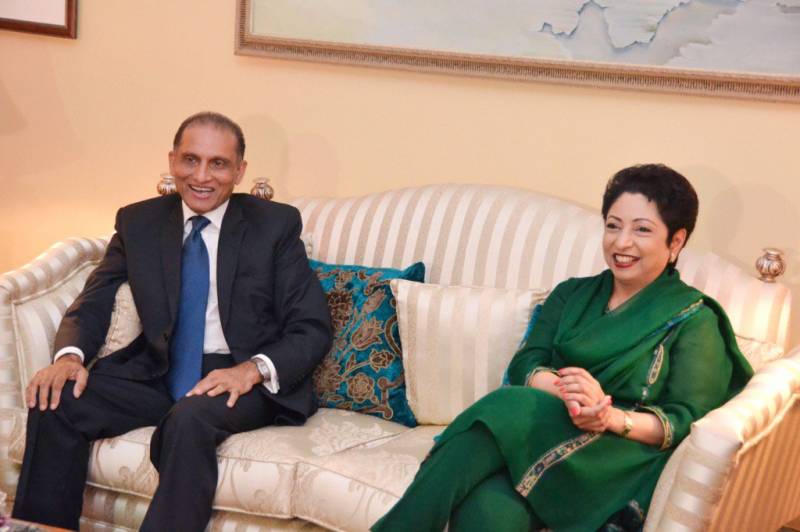 NEW YORK (Usman Shami) - “Kashmir is the top priority item on Prime Minister’s agenda during his visit to United Nations this year. He will raise the issue forcefully in the UN General Assembly and in all the bilateral meetings with world leaders on the sidelines”, these comments were made by Pakistani Foreign Secretary Aizaz Choudhry at a dinner hosted by Pakistan’s ambassador to the UN Maleeha Lodhi at her residence, last night, for Pakistani journalists who have arrived here to cover the UN General Assembly session.

While briefing the journalists on the PM’s schedule, Maleeha Lodhi pointed out the fact that this is his fourth address to the UN General assembly as the prime minster of Pakistan. This year more than 130 world leaders are expected to attend.

Prime Minister Nawaz Sharif is scheduled to arrive in New York today afternoon (US time), and will begin his official engagements from Monday. His first meeting has been scheduled with United States’ Secretary of State John Kerry, at the latter’s request. He’ll also hold a bilateral meeting with UK’s new Prime Minister Theresa May on Monday, which is to be followed by a one on one meeting with the Saudi Crown Prince Muhammad bin Naif. In total, bilateral meetings have been scheduled with eleven world leaders including the Turkish and Iranian Presidents, and Chinese Premier.

The PM will address the UN General Assembly in the afternoon on 21st September, 2016. While talking to the journalists the Foreign Secretary highlighted that his speech carries immense importance especially with respect to Kashmir issue. Prime Minister Modi decided not to attend the General Assembly this year, the Pakistani foreign secretary claimed that Modi made this decision to avoid embarrassment over the recent developments in Kashmir.

Pakistani ambassador to the UN added that Pakistan’s efforts in this regard have started to bear fruit and the latest evidence of this is the UN High Commissioner for Human Rights Zeid Ra’ad Al-Hussein’s request to India and Pakistan for access to Azad and Indian occupied Kashmir.

In his statement the Commissioner had said, “I believe an independent, impartial and international mission is now needed crucially and that it should be given free and complete access to establish an objective assessment of the claims made by the two sides”. Pakistan immediately gave its consent to allow access, while India shied away. Maliha Lodhi claimed that this request came in response to the PM’s recent letter to the UN general secretary on Kashmir issue.

Pakistan also intends to circulate the letters written by the leadership within UN security council with a request to make them part of security council’s record. The foreign Secretary stressed that finally the Indian atrocities in Kashmir are being exposed to the world and world leaders have now also started acknowledging Pakistan’s point of view.

He added that the way PM Nawaz has consistently raised the issue in the UN during his current term in office is something unprecedented in the history and even the opposition parties have failed to find room for criticism in this regard.

Prime Minister will be the guest of honor at a lunch hosted by US-Pak Business Council on 22nd September, this is his only non-UN engagement during the trip. He won’t carry out interactions with the Pakistani community due to his focused agenda and busy schedule, his office communicated to the media.

The PM will also speak at two bilateral summits on Refugee Crisis, on the sidelines of the general assembly, one of which is being co-hosted by the US along with six other countries.