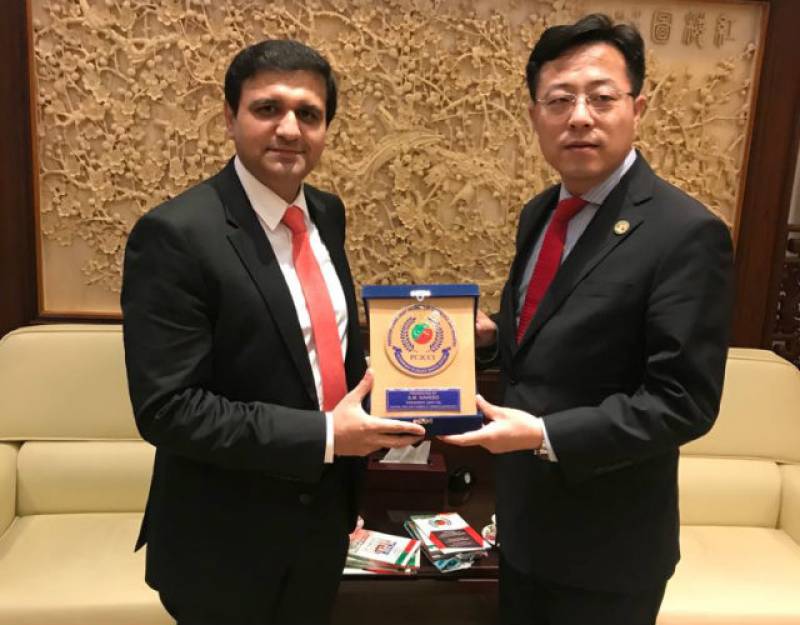 LAHORE - A senior Chinese official in Pakistan has appreciated the Pak China Joint Chamber of Commerce and Industry for undertaking a successful move to bridge in the communication gap between peoples of China and Pakistan.

Zhao Lijian, Charge D Affairs at the Chinese embassy, in a meeting with PCJCCI president SM Naveed along with the secretary general, Salahuddin Hanif, also applauded the Chamber’s initiative of publishing the first Chinese-Urdu dictionary and Chinese Language Learning Book in Pakistan.

He added that the platforms like PCJCCI, which are promoting and facilitating common masses for acquiring Chinese language knowledge, are the great contributors to growth in currently growing relations between China and Pakistan. Mr Lijian highly acknowledged the foresightedness of PCJCCI for realising the need of exclusive Chinese publications designed to ease people of both countries.

SM Naveed apprised the Chinese diplomat with the services of PCJCCI. He informed that Pak China Joint Chamber of Commerce and Industry has been formed and working to identify the inherent trade and investment potential besides suggesting the ways to combat challenges/threats to the sustained momentum of economic co-operation through collaborative efforts of both countries.

The PCJCCI president further discussed with Mr Lijian about Relocation of Labour intensive Chinese Industry to Pakistan. He said that China is moving from labour-intensive to capital-intensive industry that will relocate to other countries. “China’s upgrading to higher industries will leave a huge space for Pakistan to enter a labour-intensive industrialisation development phase,” he pointed out.

Mr Naveed was confident that Pakistan can attract the Chinese manufacturing sector by developing a trained workforce for industries. The PCJCCI, he added, is in a continuous effort to highlight and invite labour intensive industries of China to venture with Pakistani companies.

Mr Lijian said he was greatly inspired by the enthusiasm of PCJCCI and the effective execution of plans under the fertile minds of its leaders. He hoped that both Pakistanis and Chinese will equally be benefited by the initiatives taken by PCJCCI. He also noted that strategically, Pakistan and China trade promotion can act as an antidote to implement the complete philosophy of ‘Belt and Road’ initiative to be emulated in other parts of the region.