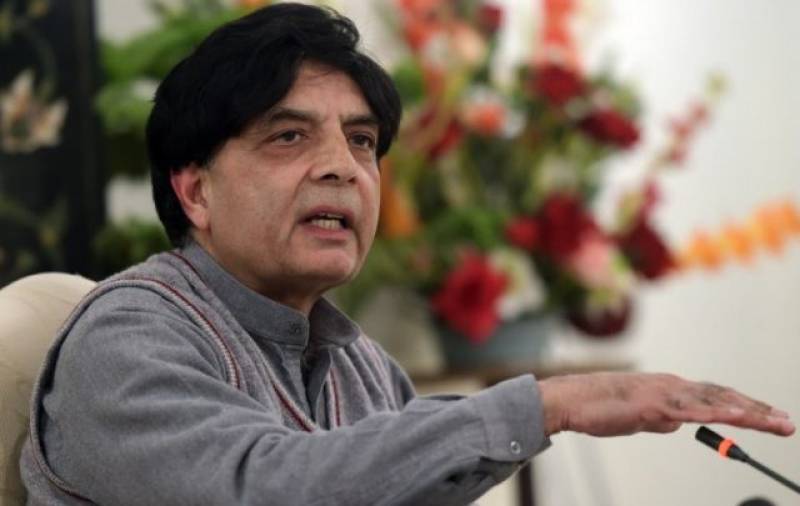 Addressing a gathering at Chakri on Sunday, Nisar said when the PML-N was established it had only 15 or 20 members, declaring that Nawaz was made the party leader as there was no other choice.

Recounting his efforts for PML-N, the Pindiite said for 34 years he carried the burden of Nawaz Sharif adding that he did not owe him anything.

"Nawaz is indebted to me," Nisar said alluding to his possible departure from embattled PML-N.

The former security czar shared that there were many things which he wanted to share with people about the inner politics of PML-N and the role of Nawaz Sharif and Maryam Nawaz but hastened to add that due to the critical health condition of Begum Kalsoom Nawaz, he would not speak about it.

"July 25 would be the day of change and people would get rid of the traditional politics of non-eligible politicians," said Nisar.

During his speech, Nisar's loyalists chanted ‘Go Nawaz Go’ slogans but the politician stopped the participants.

The former lawmaker also claimed that those who say ‘give respect to vote’ asked him to pull out of the electoral race but declared that he will contest and will respond to rivals on July 25.

Ch Nisar also negated the reports that he was in talks with his class fellow-led party, PTI, for seat adjustment.

Ch Nisar - once a close confidante of both elder and younger Sharif - is contesting the upcoming elections as an independent candidate.

Though PML-N President, Shehbaz Sharif, had expressed that Nisar would be awarded a ticket irrespective of whether he applies for that or not, however, the disenchanted PML-N leader decided to run for the polls in an independent capacity.

On Saturday, PML-N leader and former Railways Minister Khawaja Saad Rafique had announced that Nisar had parted ways with the PML-N.