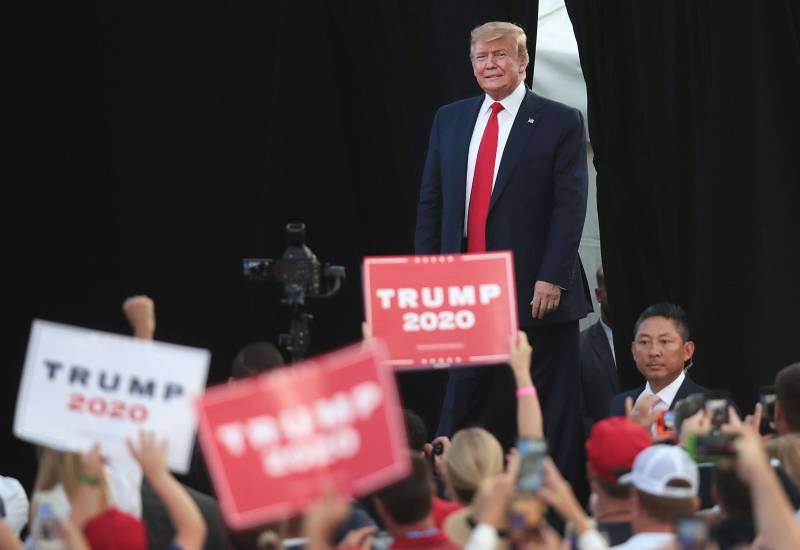 NEW YORK – US President Donald Trump has accused his Democratic opponents of trying to "destroy our country" as he officially kicked off his re-election campaign with a packed-house rally in Orlando, Florida.

"Our radical Democrat opponents are driven by hatred, prejudice and rage," he said on Tuesday night, pointing to House if Representatives' efforts to investigate his 2016 campaign's ties to Russia and possible obstruction of justice by the president.

"They want to destroy you and they want to destroy our country as we know it. Not acceptable, it's not going to happen. Not going to happen." The Russia probes aren't just an attack on him, he told the crowd "they are really going after you. They tried to erase your vote, erase your legacy of the greatest campaign and the greatest election probably in the history of our country."

"I can promise you that I will never ever let you down I won't," Trump told cheering and chanting supporters who packed a pro basketball arena in downtown Orlando.

NEW YORK - The Time magazine has named President-elect Donald Trump its Person of the Year 2016 due to his influence in ...

While promoting issues like the economy and border security, Trump spent as much time condemning his Democratic opponents as "socialists" and "left-wing" extremists who have tried to destroy him and his family, and have "looked down" on his many supporters.

Signaling a brutal campaign over the next 16-and-a-half months, Trump accused enemies of trying to nullify the results of the 2016 election through investigations of Russian interference and calls for impeachment.

Describing Florida as a "second home," the owner of the Mar-a-Lago resort in Palm Beach reached back for many of the elements that marked his raucous political rallies of 2016.

At length, he criticized then-Democratic nominee Hillary Clinton over her use of private emails, prompting old-time chants of "Lock Her Up." Trump made little reference to the nearly two dozen Democrats who are seeking their party's nomination in 2020, save for a couple of sneering references to "Sleepy" Joe Biden, a former vice president, and "Crazy" Bernie Sanders, an avowed socialist also seeking Democratic presidential nomination.

These and other Democrats said Trump has succeeded only in dividing Americans, alienating global allies, and slowing the economy with ill-advised tariffs and trade wars that have spooked markets.

Praising Democratic predecessor Barack Obama, Biden tweeted "let's be clear: President Trump inherited a growing economy from the Obama-Biden administration. And now, he's in the process of squandering it.

Let’s be clear: President Trump inherited a growing economy from the Obama-Biden administration. And now, he’s in the process of squandering it.

On his Twitter feed, Sanders said "the president won't address our health care crisis or climate change. But he will try to divide us up and go after undocumented people who have very little political power. That is what demagogues always do and that is why he must be defeated." In an announcement speech that ran longer than an hour, Trump promoted issues like border security and trade tariffs, and excoriated the media and the Democrats for spotlighting the Russian issue and other controversies surrounding his presidency.

"Nobody has done what we have done in two-and-a-half years," he said at one point.

Our most important job is to defeat the most dangerous president in the modern history of this country.

Trump described his election he lost the popular vote, but won the Electoral College as "a defining moment in American history," and he urged Americans to give him a second term to finish the job.

During his speech, Trump reviewed many of the events that have marked his first term in office. He condemned the Russia investigation by Special Counsel Robert Mueller and accused Democrats and the media of conducting a "witch hunt" designed to "take down our incredible movement." While Trump claimed "no collusion" and "no obstruction," critics said Mueller provided plenty of evidence of cooperation between Trump's 2016 campaign and the Russians, as well as efforts by the president to obstruct Mueller's investigation.

Trump frequently engaged the crowd, telling them they put him in the White House and they are the ones who are the real targets of political attack. At one point, Trump conducted a "poll" on whether he should keep his 2016 political slogan ("Make America Great Again") or replace it with a new one: "Keep America Great.'' The new slogan won the voice vote by a loud margin.

Trump did not receive a completely friendly welcome in Central Florida.

The Orlando Sentinel newspaper ran an editorial listing reasons to vote against the incumbent, saying "Donald Trump is in Orlando to announce the kickoff of his re-election campaign. We're here to announce our endorsement for president in 2020, or, at least, who we're not endorsing: Donald Trump."

Meanwhile, multiple polls show him trailing former Vice President Joe Biden and other Democratic contenders in key battleground states. Trump insists his internal polling shows him ahead, but his campaign severed ties with its pollsters after leaked internal polling showed him trailing Biden by double digits in the key swing states of Wisconsin, Pennsylvania, Florida, and Michigan.