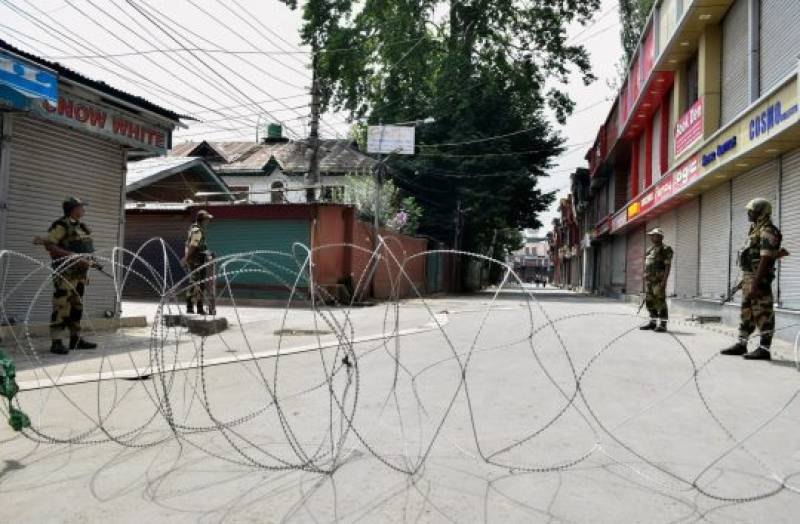 SRI NAGAR - Curfew and other restrictions continue since August 5 when Narendra Modi government announced scrapping of the special status in Indian occupied Kashmir.

According to Kashmir Media Service (KMS), the entire occupied territory particularly the Kashmir has been turned into a military garrison as Indian troops and police personnel are deployed in every nook and corner.

In Srinagar, thousands of troops and policemen are patrolling the deserted streets, lanes and by-lanes to thwart any attempt of people to stage anti-India demonstrations.

Due to the severe blockade, a famine-like situation is emerging as people are facing a severe shortage of essential commodities including baby food and life-saving medicines.

Almost all Hurriyat leaders, including Syed Ali Gilani and Mirwaiz Umar Farooq continue to remain under house arrest or in jails. Thousands of other political leaders and workers including three puppet chief ministers Farooq Abdullah, Omar Abdullah and Mehbooba Mufti are detained over the past two weeks.

Since August 4, an unprecedented communications blockade has been imposed in the region, cutting the region from the rest of the world and preventing contact within Kashmir and with the outside world for the 16th consecutive day today.

Despite the so-called direction for reopening of nearly 200 Primary schools in selected areas of the disputed territory, schools were empty as wary parents refused to send their children to schools while the situation remains tense amid curfew and intensity of sporadic protests.

Markets and shops remain closed in Srinagar. Transport services, including trains and a fleet of privately-owned buses, have not yet returned to the roads.