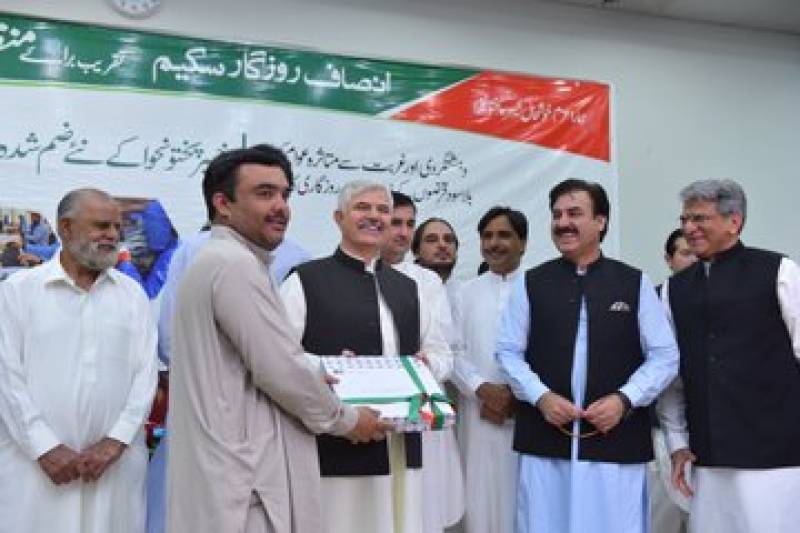 PESHAWAR – Khyber Pakhtunkhwa Chief Minister Mehmood Khan on Thursday formally launched ‘Insaaf Rozgar Scheme’ with initial grant of Rs1 billion under which interest free loans up to Rs1 million would be provided to the tribal professional experts, degree holders and those starting or expanding their businesses through Bank of Khyber.

The loan of rupees amounting to Rs 50,000 to 100,0000 would be provided to professional experts like doctors, engineers and degree holders in erstwhile FATA.

On the occasion, sanctioned letters of loans were handed over to the eligible applicants by the chief minister.

Addressing the ceremony, the CM said it was the matter of great pleasure for him to handover the initial letters of approved loans to the deserving applicants. He said it was leap forward towards new Khyber Pakhtunkhwa (KP) and a new Pakistan as pledged by the PTI government.

He said it was need of the hour that this scheme should be taken forward transparently so that tribal people may get their deserving rights. The scheme, he said will economically strengthen 5,500 deserving people and their families.

The CM said the prime objective of Rozgar Scheme was to eradicate the sense of deprivation and unemployment among KP people especially of FATA and provide them with a honorable source of income so that they could play a pivotal role in providing a bright future to the coming generations.

Since the very first day, the KP government was endeavouring to contain unemployment and provide the youth with sufficient sources of income to enable them earn an honorable livelihood for their families and put their share in uplift of the country.

The government, he said believed that tribal districts should be made enable to get fruits of democracy in the country so that the journey of quick and uniformed progress could be embarked upon with unity and without any discrimination.

The tribal areas were being kept backward by the previous governments besides the curse of militancy and terrorism also kept these areas in darkness–but now the time has come to remove their sense of deprivation and bring them at par with the developed areas.

The government, he continued was faced with multiple problems but despite that it allocated a hefty sum of Rs1billion for Insaaf Rozgar Scheme by cutting its expenditures which shows the PTI government was a people-friendly political entity.

The aim of this scheme, he added was not to benefit just a specific tribal district but to provide interest free loans on basis of population to the entire tribal districts.

At this historical moment, he said all the government machinery especially the Bank of Khyber deserved his heartfelt felicitation that extended complete cooperation to the government in this endeavours and made it a success story.

It was all due to these collective efforts that the government was today introducing this scheme at public level and provided the letters of approved loans to deserving people within shortest possible time.

Latter in a brief chat with media, the Chief Minister said the volume of total disbursement under interest free loan would be taken up to Rs5billion. He said that it is the second scheme after Sehat Insaaf Card launched by the PTI government for the merged areas, which is the corner stone of the policy of Prime Minister Imran Khan.

Finance Minister, Taimur Khan Jhagra also addressed the function and said that the present government enhanced the development funding in merged areas from Rs55bln to 162bln as per the vision and policy of Imran Khan.

Over 7,000 people in tribal district sacrificed their lives in war against terror, therefore they needed to be properly compensated and rehabilitated. Those championing the cause of tribal districts have ignored the tribesmen in their respective governments in the past.

MD Khyber Bank, Saiful Islam thanking the KP government for launching the scheme said it would provide some kind of relief to the people affected by the militancy. The scheme would enable the deserving applicants to restart their businesses in merged areas.

He said the BoK received over 2,000 applications after the announcement of the scheme by the government from merged areas and today the eligible applicants fulfilling the required criteria have been given sanctioned loan letters.