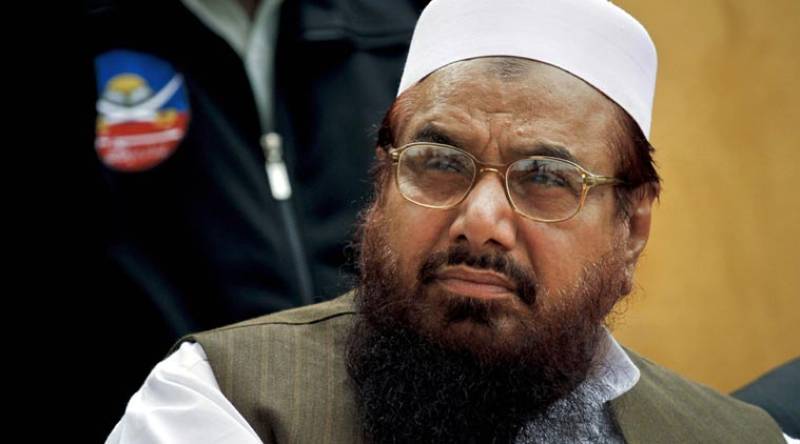 LAHORE - A provincial review board comprising judges of the Lahore High Court (LHC) has extended detention of Jamatud Dawa’s chief Hafiz Muhammad Saeed for a month.

The police on Thursday produced Saeed and his aides Qazi Kashif Niaz, Prof Zafar Iqbal, Abdul Rehman Abid and Abdullah Ubaid before the board, while strict security measures have been taken in this regard.

From the government side, officials of interior and foreign affairs ministries showed up along with government’s law officers, who also asked the board, comprising  Justice Muhammad Yawar Ali, Justice Abdul Sami Khan and Justice Alia Neelum, to extend the detention of Saeed and his aides.

However, the court rejected the request to carry on the detention of four aides and only approved the extension for Hafiz Saeed. The four JuD leaders would be released on Oct 26 with the expiry of detention period, Dawn News reported.

The JuD leaders were kept in detention by the Punjab government under the Maintenance of Pubic Order following the recommendation of the federal government.

On the other hand, a single bench of the high court on Thursday adjourned hearing of Saeed's petition against his detention as the law officer informed the court that Attorney General of Pakistan Ashtar Ausaf  was abroad, besides asking to adjourn the case.

Saeed has been accused by the United States and India of masterminding the 2008 attacks on the Indian financial hub Mumbai that left 166 people dead. He, however, has repeatedly denied involvement in the 2008 Mumbai attacks.