Pakistan renews it full support to Palestinians’ cause 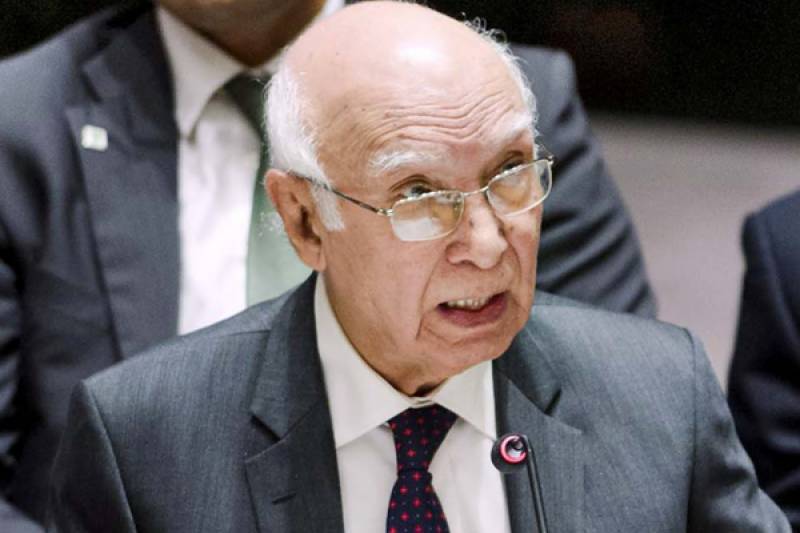 UNITED NATIONS - Expressing grave concern over the plight of Palestinian people, Pakistan Monday renewed its support to their right to self-determination in accordance with the relevant UN resolution and the Arab peace initiative.

Speaking in the the annual meeting of the OIC Committee on Palestine, held on the sidelines of the UN General Assembly, the Adviser to the Prime Minister on Foreign Affairs, Sartaj Aziz, said the basic rights of the Palestinian people were being violated by Israeli occupation, expansion of illegal Israeli settlements, systematic killings of innocent Palestinians, continued blockade of Gaza, and policy of administrative detentions.

Aziz led the Pakistan delegation to the meeting, which convened by the Secretary General of the OIC, Iyad Ameen Madani. It was also attended by the Foreign Ministers of Palestine, Malaysia and Senegal, as well as representatives from Egypt, Jordan and Turkey.

The Advise emphasized that a sustained and meaningful engagement of the international community, remained essential to reviving the stalled peace process. An independent, viable and geographically contiguous Palestinian State, on the basis of the pre-1967 borders, with Al-Quds Al-Sharif as its capital, was central to this process.

The meeting called upon the international community to take all necessary steps to compel Israel to strictly abide by its commitments under international law, and to fulfill its obligations for the establishment of a two-state solution, for lasting peace and stability in the Middle East.