Tension de-escalates as Pakistan, US agree to resolve conflict through dialogue 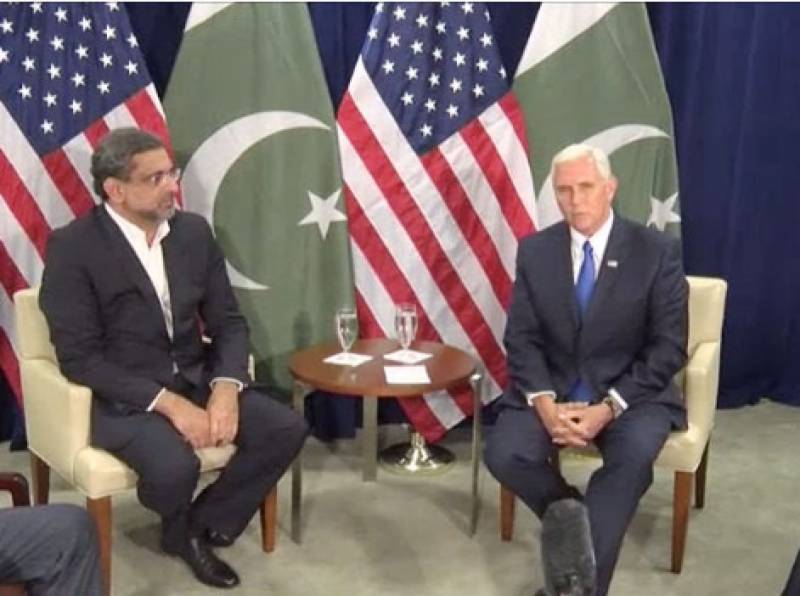 The agreement surfaced during a meeting between both officials on the sidelines of United Nations General Assembly session in New York. The US vice president also expressed willingness to send a delegation to Pakistan next month for this purpose.

Vice President Mike Pence during the meeting said that the US wanted to have long term partnership with Islamabad in order to bring peace and stability to the region.

In response, PM Abbasi said Pakistan is an active player in war against terrorism, adding that the war caused of huge losses to the country.

She added that both sides also decided to continue talks over the Afghanistan issue, Radio Pakistan reported.

She further said that an American delegation will visit Pakistan in October, next month, to ease the tensed relations.

The meeting was held despite the opposition of Chairman Senate Raza Rabbani, who asked the Prime Minister Abbasi to not hold meeting with US Vice President Mike Pence.

He said, "If President Trump is not meeting him then the [Pakistan] prime minister should also not meet Mike Pence".

In August, US President Donald Trump unleashed his policy of ramping up pressure on Pakistan, a close ally of US, in a bid to fully implement the revamped Afghan war strategy.

Accusing Islamabad of providing safe havens to "agents of chaos, violence, and terror" the tycoon-turned-president clarified to increase pressure on the country to stop any re-emergence of safe havens in order to gain regional peace, besides announcing increase of US troops in Afghanistan.