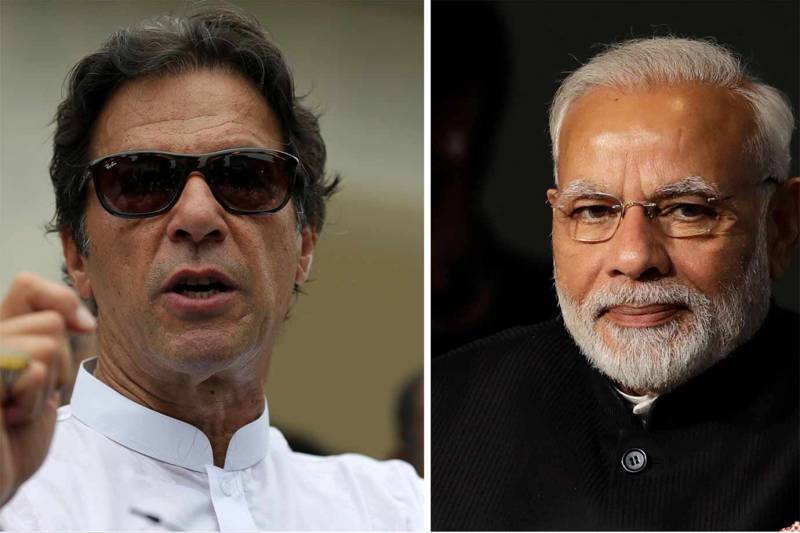 The Pakistani premier has written a letter to Modi suggesting a meeting between Shah Mahmood Qureshi and Sushma Swaraj, Pakistan and India foreign ministers respectively, on the sidelines of the United Nations General Assembly session going to be held in New York later this month.

"Building on the mutual desire for peace between our two countries, I wish to propose a meeting between Foreign Minister Shah Mahmood Qureshi and the External Affairs Minister Sushma Swaraj before the informal meetig of the SAARC Foreign Minister at the sidelines of the upcoming UN General Assembly in the New York," read the letter.

PM Imran also said that India and Pakistan should look at resolving all major outstanding issues, including Kashmir, through dialogue.

It added, "We, however, owe it to our peoples, especially the future generation, to peacefully resolve all outstanding issues, including the Jammu & Kashmir dispute, to bridge differences and achieve a mutually beneficial outcome. Sir Creek also need close attention to move towards resolution". 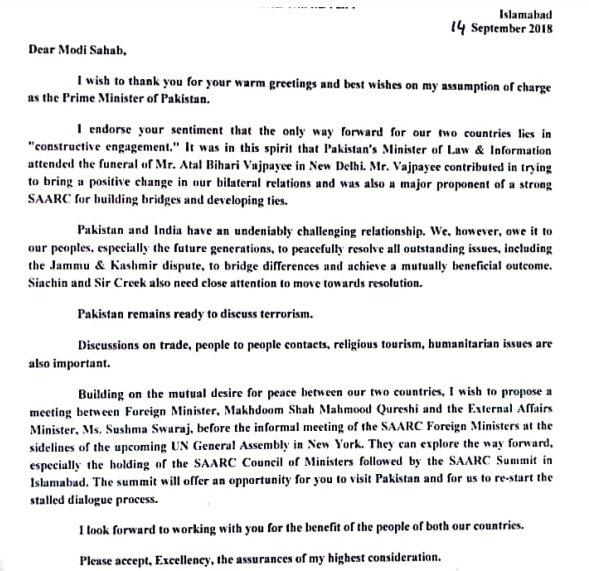 The communication was also confirmed by Foreign Office spokesperson Dr Mohammad Faisal stating that the prime minister responded to PM Modi, in a positive spirit, reciprocating his sentiments. Let’s talk and resolve all issues. We await formal reaponse from India.

Last month, the Indian premier wrote to Imran stating: “Prime Minister Modi expressed India’s commitment to building good neighbourly relations between India and Pakistan and pursuing meaningful and constructive engagement for the benefit of the people of the region,” sources said.

ISLAMABAD - Prime Minister Narendra Modi, in a letter to his new Pakistani counterpart Imran Khan, has called for ...

After Khan received Modi's letter, he had tweeted that "To move forward Pakistan and India must dialogue and resolve their conflicts incl Kashmir".

The best way to eliminate poverty and uplift the people of the subcontinent was to end differences through talks, he had said.

Imran Khan, after his victory in the July 25 elections, had said that Pakistan was ready to respond positively to any effort on dialogue. “If India comes and takes one step toward us, we will take two,” Khan had said.

Prime Minister Modi had telephoned Khan to congratulate him on his party’s victory and hoped that “Pakistan and India will work to open a new chapter in bilateral ties.”

Pakistan Foreign Minister Shah Mehmood Qureshi, in his first remarks upon taking charge, said he would bridge the trust-deficit with neighbours and try to build new bridges. “Coming to the table and talking peace is our only option. We need to stop the adventurism and come together. We know the issues are tough and will not be solved overnight, but we have to engage,” he said.

Qureshi indicated that Pakistan would stay focussed on the full implementation of the China-Pakistan Economic Corridor (CPEC), which he described as a game-changer.

“We cannot turn our cheek. Yes, we have outstanding issues. Kashmir is a reality; it is an issue that both our nations acknowledge. India and Pakistan have to move forward keeping realities before them,” he said.