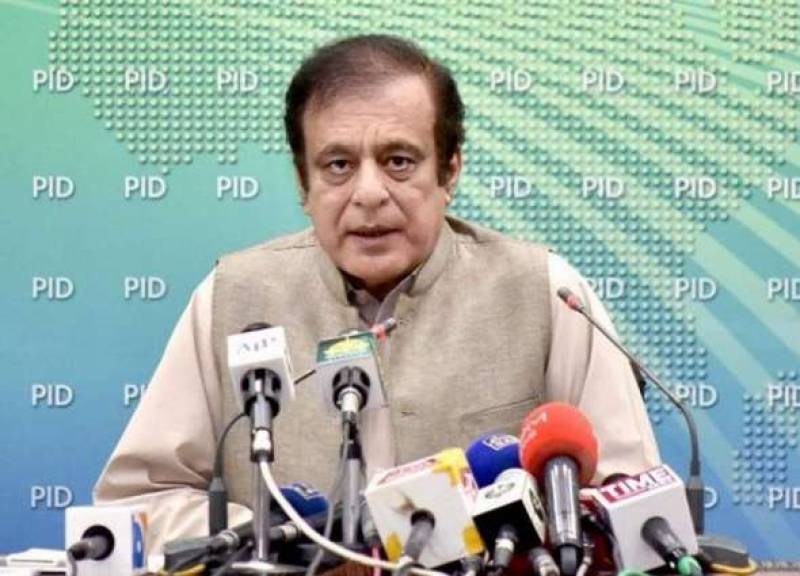 ISLAMABAD - Minister for Information and Broadcasting Senator Shibli Faraz Friday said the government would use all available legal options for bringing Nawaz Sharif back from London to face cases in the courts of law.

The National Accountability Bureau (NAB) would be asked to write to the British government through the Foreign Office for the extradition of Nawaz Sharif, he said while addressing here a press conference.

Shibli Faraz said Nawaz Sharif had gone to England on six-month bail on medical grounds given by the court on human considerations. The medical documents presented before the court seemed to be fudged to create an impression that he was seriously ill. However, when he reached London he even did not bother to have an X-ray what to speak of any medical treatment.

When his lawyers filed an appeal with the Punjab government for extension of his bail, they were asked them to provide his latest medical report to justify their plea, but they failed to do so, he added.

The minister said now the time had come that Nawaz Sharif, who had made fun of the judicial system by misleading the courts, should return home. If he was innocent then he should come back to face the pending cases. Why he was he running away from law of the land and the courts, Shibli questioned.

He said instead of getting medical treatment in London, Nawaz was indulged in political activities. He had phonic contacts with Mulana Fazlur Rehamn and Bilawal Bhutto Zardari.

It were for the courts to decide the pending cases against Nawaz Sharif, but it was the government's responsibility to present the accused before them, he added.

As regards the legislation related to the Financial Action Task Force (FATF), the minister said the opposition was trying to blackmail the government and get concessions in the corruption cases in return for getting passed the law. The Pakistan Tehreek-e-Insaf government would never be blackmailed, he added.

He said the opposition leaders preferred their personal interests over the national ones. They wanted to change the interpretation of corruption and abolish the institution of National Accountability Bureau for personal benefits.

He said the main difference between the past and present rulers was that the former worked for the protection of their personal interests whereas Imran Khan was keeping the national interests supreme. They were trying to cash in on the FATF-related legislation to get personal benefits. They tried to blackmail the government, but it should be clear to all that Imran Khan had no personal enmity with any one and he was only trying to bring the looted national wealth back and provide relief to the masses by reducing the prices of daily use items, petroleum products and electricity tariffs.

Shibli Faraz said in the past the people appointed in regulatory institutions facilitated the then rulers in their loot and plunder of the national exchequer. The money laundering was one of the big issues.

He said India had been trying to damage Pakistan's national interests and succeeded to put it on the grey list of FATF. In October a final decision would be made either to remove Pakistan from the grey list or include it in the black one.

If Pakistan, he said, was included in the black list, its economy would be badly affected as international banks would stop giving any loans and facilities for Pakistani businessmen. There would be no foreign investment in the country, the Pakistani Currency would be devalued, and the prices of petroleum products and daily use items, besides power tariffs, would shoot up.

Ultimately the masses would suffer.

The minister said the opposition's only objective was to gain political mileage. They even did not spare the coronavirus outbreak and demanded a complete lockdown. Prime Minister Imran Khan, however, wanted to save the lives and livelihood of the poor, and opted for the strategy of smart lockdown of the affected areas.

With the blessings of Allah Almighty, Pakistan had to a great extent succeeded in controlling the pandemic and that was because of the good intentions o f the leadership, he added.

Shibli Faraz said the opposition also damaged the Kashmir cause when it had to come to the limelight internationally after Imran Khan's historic speech at the United Nations General Assembly last year. Mualna Fazlur Rehman started a sit-in to divert the world attention from the Kashmir issue.

Replying to the media persons' questions, the minister said if Nawaz Sharif had done nothing wrong then he to return home and get himself cleared from the courts. He remained prime minister thrice and it was his moral and ethical responsibility to submit before the law.

The government, he said, would exercise all legal options to bring Nawaz back. He clarified that neither Imran Khan nor the PTI had anything personal against the leadership of Pakistan Muslim League-Nawaz.

The minister said if Maryam Nawaz and Bilawal Bhutto Zardari were political leaders on the basis of political hierarchy, then he should also be a great poet, being the son of eminent poet Ahmad Faraz.

He said the era of attacking the Supreme Court and subjugating the state institutions had gone now. Maryam should must give answers to the questions regarding her 1100-kanal land instead of staging a drama and pelting the NAB office with stones.

Referring to the FATF-related legislation, he again emphasized that the government would never bowed to the opposition's pressure. The opposition sticking to its guns for for seeking an NRO (National Reconciliation Ordinance) and not extending support on FATF law was tantamount to enmity with the country as Pakistan's inclusion in the black list would have very serious implications for the national economy. The people were in great hardships because of the governments' disastrous policies.

As redemption for their past sins, the opposition legislators should better vote for the proposed legislation and bring back the looted national wealth to Pakistan, he added.

The minister said whenever the pressure of corruption cases increased on them, they started talking about all parties conferences (APCs) and agitation, but their such tactics would not work now.

He said the PML-N government had ruined the national economy and one instance was of its finance minister Ishaq Dar of artificially maintaining exchange rate of Dollar by doling out $6 billion annually, which had badly hurt the industry and led to de-industrialisation in the country.

He said putting aside political affiliations, the media persons should ask the former rulers how they became richer and built properties abroad. Nawaz Sharif fled the country on the basis of a medical report, and was now seen doing shopping and enjoying coffee there, but he had not produced a document before the courts regarding his Avenfield apartments.

On the contrary, despite having never been in the government, Imran Khan produced the four decades old record to get a clean chit from the courts, he added.