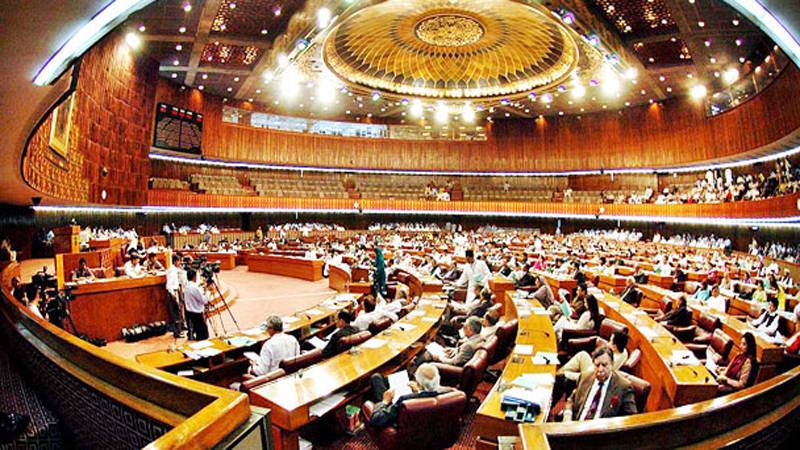 ISLAMABAD - Lawmakers from opposition benches staged a walkout from the National Assembly for the ninth consecutive session on Thursday, after a bill on the Federally Administered Tribal Areas (Fata) reforms was absent from the agenda once again.

On Tuesday, National Assembly Speaker Ayaz Sadiq had assured parliamentarians that the bill would be presented in the lower house the following day after the opposition registered its protest over the government's inability to table the bill.

Despite the speaker's assurance, however, the bill was not presented in the Assembly which riled the legislators who walked out from the house.

The meeting between the premier and the JUI-F members did not produce any fruitful results and a member of the council declared that the party's reservations over the reforms remained, Dawn News reported.

Disputing the impasse, Barrister Zafarullah Khan, who is holding the portfolio of law ministry expressed that the two parties were "near a consensus".

As the legislation was missing from the Thursday's agenda again, opposition leaders staged a walkout from the Lower chamber of the parliament.

Earlier, on Wednesday, PPP leader Naveed Qamar asserted that the opposition would continue to stage protests and walkouts until the government agreed to debate the Fata reforms bill in the assembly.

The Fata reforms bill, that was part of the National Action Plan of 2015, includes mainstreaming the tribal region by extending the Supreme Court's jurisdiction to the area, repealing of the draconian Frontier Crimes Regulations (FCR) of 1901, as well as its merger with Khyber Pakhtunkhwa.

Fata is still ruled under the British-made FCR of 1901, which violates the fundamental rights of the tribal people.

The law states that three basic rights are not applicable to Fata locals: appeal, wakeel and daleel.