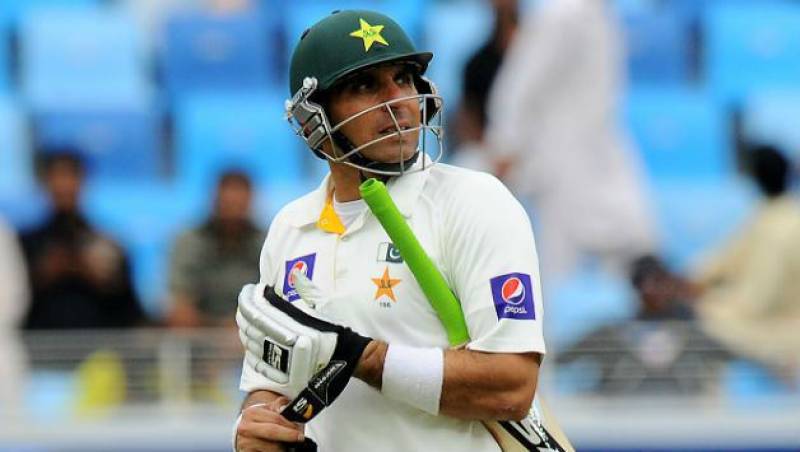 DUBAI (APP) - Misbah-ul-Haq hit a brilliant century to help Pakistan post a respectable 282-4 on the opening day of the second Test against England in Dubai on Thursday.

Pakistan´s Test skipper held the innings together with an unbeaten 102 for his ninth century and the first against England and, with him, Asad Shafiq was 46 not out after Pakistan won the toss and opted to bat on a brownish-green pitch which is expected to turn as the game progresses.

Misbah added 93 with Younis Khan (56) and another 104 for the unbroken fifth wicket stand with Shafiq as Pakistan aim for a big score to force a lead in the three-match series.

The first Test ended in a draw in Abu Dhabi last week.

Misbah, who hinted at retirement from international cricket after this series, hit two sixes in spinner Moeen Ali´s final over of the day and then reverse-swept for two to complete his hundred off 190 balls.

In all, he has hit eight fours and five sixes during his 192-ball innings.

Shafiq, who survived a run-out when on 12 and a reviewed lbw appeal on 31, shaped up well during his 93-ball knock, hitting six fours.

England did take the second new ball after 83 overs with Pakistan on 247-4 but failed to dislodge the Misbah-Shafiq partnership.

Pakistan lost Younis in the third over after tea, caught off a lazy-looking leg-side glance off seamer Mark Wood.

Younis hit four fours during his 115-ball innings and became the 14th highest run-scorer in all Test cricket, surpassing England´s Graham Gooch, who made 8,900 in 118 Tests.

Masood also fell, to the first ball after lunch, as he edged paceman James Anderson to wicketkeeper Jos Butler and unsuccessfully reviewed the decision.

With the wicket, Anderson now leapfrogs Indian spinner Harbhajan Singh (417 wickets) in all time wicket-taker´s list with 418. He is now ninth in the highest wicket-takers list in Tests.

England introduced spinner Ali as early as the seventh over.

Hafeez struck a boundary off the first ball of Ali´s fifth over but was caught bat-and-pad by Jonny Bairstow at short leg off the very next delivery.

Malik, who scored a brilliant 245 in the first Test, lasted just nine balls before playing a short-pitched Ben Stokes delivery into the hands of Bairstow, who caught it at the second attempt.

Pakistan were boosted by the return of leg-spinner Yasir Shah, who missed the first Test with a back problem, replacing paceman Rahat Ali. England were unchanged from the first Test.

The third and final Test will be played in Sharjah from November 1.