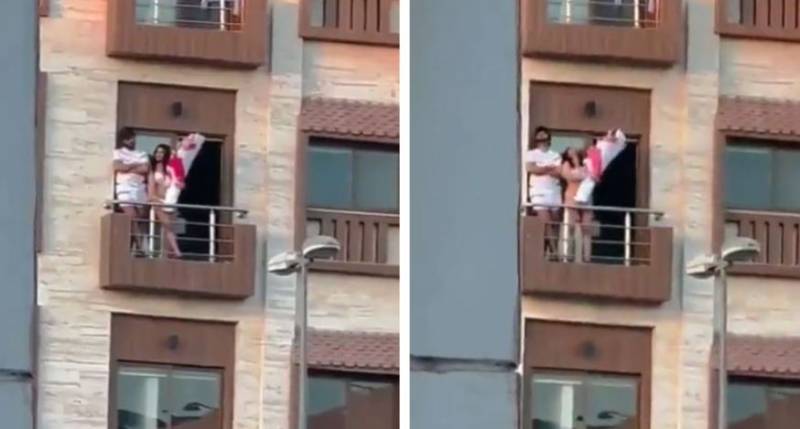 LAHORE – In a bizarre incident in the provincial capital, a woman was spotted posing in a skimpy dress near a famous shopping mall of an upscale society.

The unidentified woman was filmed standing at the balcony of a building near Lahore’s Jasmine Mall.

Passersby, who got shocked over the behavior of the woman, started filming her and captured a number of clips in which she can be seen wearing a white-colored two-piece costume while holding a bouquet of red flowers.

She was flanked by a man wearing a white t-shirt while it appears that she posed for a photographer who was clicking her from a distance as the passersby stare at her in shock.

🔴 Is it Islamic Republic of Pakistan?

The incident has reportedly created a lot of buzz on social media with netizens guessing the reason behind the shocking act.

Meanwhile, social media users are lashing out at the woman for sharing vulgarity while some defended her as her video has been doing rounds on the internet without her consent.

Some even hinted at legal action as nudity attracts strict action under the country’s conservative laws.

The authenticity of the viral video is yet to be verified independently.