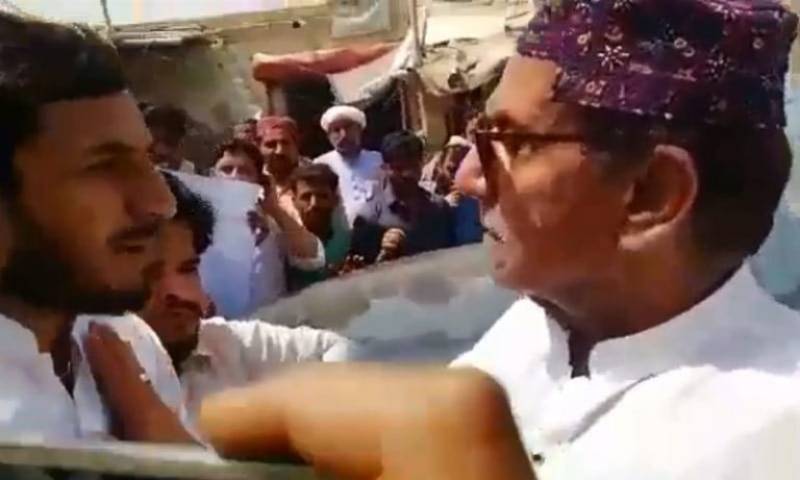 KASHMORE - It seems that the Pakistani voters have finally decided to cash in on their power ahead of the forthcoming elections as they are shaming the public representatives, with a Pakistan People's Party leader, Sardar Saleem Jan Mazari becoming the latest victims of grilling.

Mazari visited his area recently in a bid to woo voters in the run up to the next polls however, he had to face the wrath of his supporters in Sindh.

A video of Sardar's helplessness shows the politician being rounded up by the constituents in his hometown Kashmore.

After Sardar Jamal Leghari, it is Sardar Saleem Jan Mazari. His voters are demanding education & opportunity.

He has no answers.

Pakistan must find a way to answer their questions. pic.twitter.com/3R4VnxLuvX

Mazari, former MPA and District Nazim, faced tough questions from a group of furious youngsters who questioned his efficiency for the uplift of education sector in the far-flung area.

The PPP leader is seen trying to calm down the tempers of the youth who schooled the politicians that education was their basic right which was denied by the government.

DERA GHAZI KHAN - The senior leader of Pakistan Muslim League Nawaz, Jamal Leghari was grilled by his constituents as ...

'I am a staunch proponent of education and have always stressed the need to promote education,' said the politician to the baying crowd.

At one point he seemed to lose his cool when the youngster didn't let him speak during the election campaign for NA-197 seat of the National Assembly.

Besides Sardar Jan Mazari, Sohail Anwar Siyal, the former Sindh Home Minister also witnessed a bad day in his elections campaign as he was also confronted by the constituents.

Instead of listening to the grievances of his voters, Sohail did not disembark from his vehicle while the furious voters repeatedly knocked his door.

His SUV could be seen barreling down the road, minutes after he faced the wrath of the voters from behind his bullet-proof vehicle.