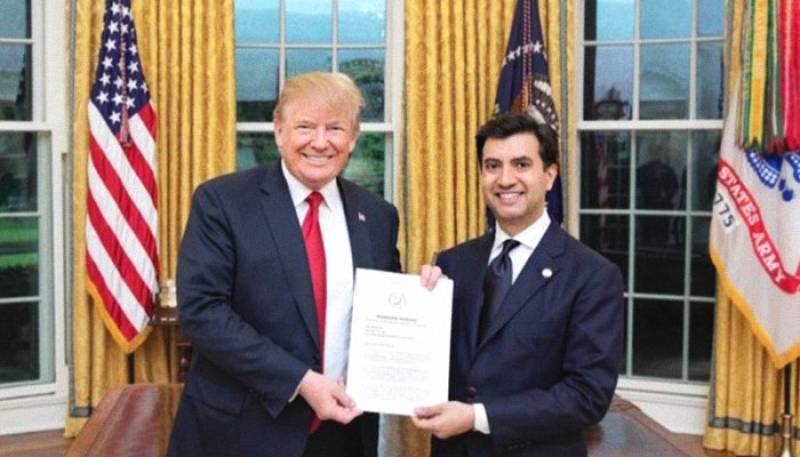 During his visit to the White House, Ambassador Siddiqui presented his credentials and related documents, following which he can officially start working as Pakistan's envoy.

Siddiqui was named the ambassador on May 8 after Aizaz Ahmed Chaudhry stepped down. On May 29, the new envoy reached US capital city and took over his new role of ambassadorship a day later.

Though Siddiqui has met various leaders and officials over this time, the meeting with POTUS was necessary for the diplomat to carry out his duties and meet notables as the Pakistani ambassador.

Siddiqui is an investment banker by profession and has worked as a special assistant to former prime minister Shahid Khaqan Abbasi.

Before moving to Pakistan in 2002, Siddiqui worked in Hong Kong as a director with Crosby Capital, an Asian private equity asset management firm that managed over US$400 million including funds managed on behalf of the Hong Kong and Korean governments.

Soon after his nomination by the federal government, Ali was summoned by the National Accountability Bureau (NAB), accusing him of causing a loss of Rs40 billion to national exchequer through ‘embezzlement’. The accountability watchdog had also sought to put his name on the Exit Control List (ECL).

Siddiqui, who holds a Bachelor of Arts (BA) degree in Economics from Cornell University, was honoured by the World Economic Forum as a Young Global Leader in 2014.

Siddiqui’s name appeared in the Panama Papers as well; he is a chairman of JS Bank Ltd and JS Private Equity Management.

He is the son of Jahangir Siddiqui, a businessman, and philanthropist; his brother is the son-in-law of famous media mogul Mir Shakilur Rehman and to everyone’s surprise, the flamboyant television star Sheheryar Munawar, is also his cousin.