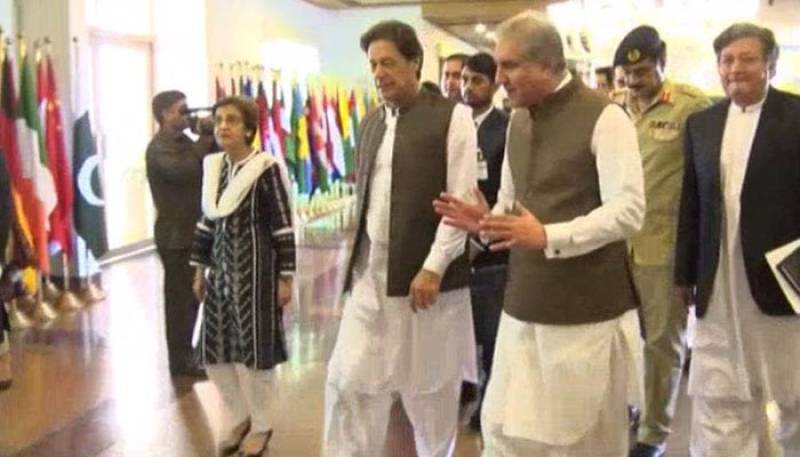 ISLAMABAD - Prime Minister Imran Khan on Friday issued guidelines to the officials at the Ministry of Foreign Affairs regarding his vision for Pakistan's foreign policy.

The prime minister held a meeting which lasted for more than an hour during his first visit to the Foreign Office. Foreign Minister Shah Mehmood Qureshi and other officials attended the meeting.

Khan said that interest of Pakistan will be put at the top while drafting the foreign policy, adding that no compromise will be made on national interests, local media reported.

He directed the Pakistani embassies in foreign countries to improve their performance, besides directing them to promote the positive image of the country.

Foreign Minister Qureshi will address a press conference in the evening to brief the nation regarding decisions taken during PM Imran's FO briefing."

The federal cabinet will approve annulation of Ministry of Capital Administration and Development (CAD) and will recommend putting institutions under it in Cabinet division.

The institutions would now be headed by Advisor Parliamentary Affairs Babar Awan. The federal cabinet ministers are advised to ensure their presence in the meeting tomorrow.

Earlier, a diplomatic row erupted between Pakistan and the US with the two countries disagreeing about whether State Secretay Mike Pompeo and Prime Minister Imran Khan held discussion over terrorism in a telephonic conversation, Washington has refused to withdraw from its original readout of the phone call.

ISLAMABAD - Taking a stand against American propaganda against Pakistan, the Foreign Office on Thursday clarified that ...

This response comes after Pakistan’s Ministry of Foreign Affairs spokesperson Dr Mohammad Faisal rejected the statement issued by the US saying there was no mention of the ‘terrorists operating in the country’ during the telephonic conversation.