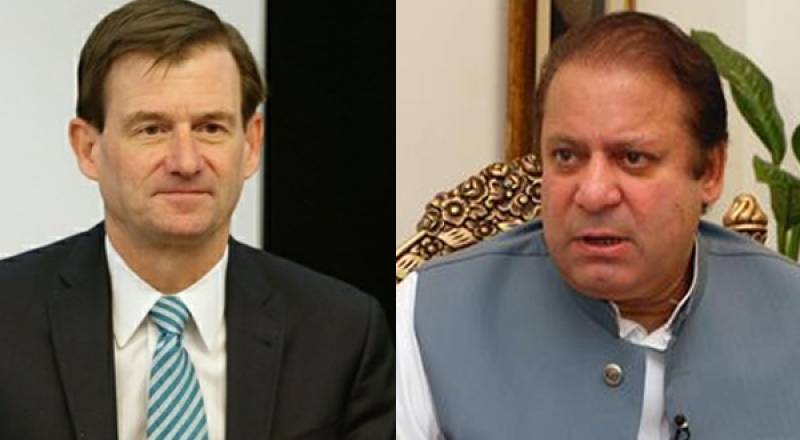 ISLAMABAD (Staff Report) - United States Ambassador to Pakistan David Hale on Thursday called on Prime Minister Nawaz Sharif, to discuss the agenda of latter's upcoming US visit scheduled in the end of this month.

While exchanging views on the bilateral relations, the Prime Minister said that Pakistan is desirous of bringing greater depth and economic substance to its relationship with the US.

“The important decisions agreed during my visit to the US have generated a new momentum in steering our bilateral relations forward”, added the Prime Minister.

The Prime Minister said that Pakistan-US Strategic Dialogue has been instrumental in identifying the achievements made so far and setting new targets under six working groups of the Dialogue.

“I look forward to have useful exchange of views on bilateral issues, with President Obama during my visit to attend the Nuclear Security Summit later this month”, further said the Prime minister.

The Prime Minister said that Pakistan has a vital stake in peace, stability and development in Afghanistan and is engaged in sincere and consistent efforts for promoting reconciliation through an Afghan-owned and Afghan-led peace process.

Appreciating the efforts of Pakistan to restore peace in Afghanistan, Mr David Hale said that initiatives including the Quadrilateral arrangement will prove significantly beneficial in bringing peace to Afghanistan.

The Ambassador further said that achieving a peaceful Afghanistan is in the interest of the entire region and Pakistan’s endeavours will help a great deal in this regard.