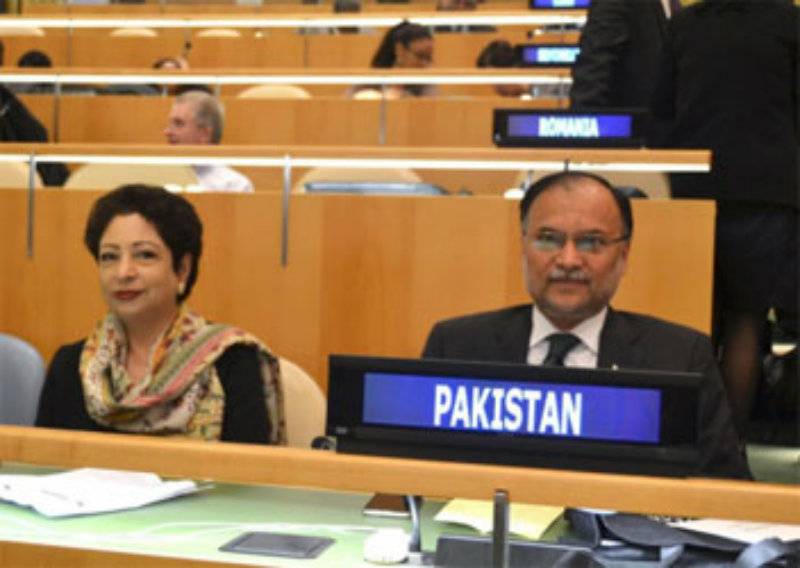 NEW YORK (Web Desk) - Pakistan has urged the developed countries to show more responsibility in helping to address development challenges in a world where prosperity and poverty still coexist.

Speaking at UNDP’s 50th anniversary Ministerial Meeting in the General Assembly, the leader of Pakistan’s delegation, Mr. Ahsan Iqbal, Minister for Planning, Development and Reform, who has been also appointed as Champion Minister for SDG Agenda by UNDP, pointed out that we live in a world of shared destiny and there can be no room for islands of peace and conflict, prosperity and poverty, health and disease, and education and illiteracy in today’s world. “These disparities must end”, he emphasized.

The UN, he said, should work towards a shared prosperity based on a revitalised global partnership for a prosperous world.

In a Davos-style panel discussion, the Minister told the world body that he has brought a message of optimism from Pakistan, which has, since the last three years, been on a journey of hope. “Pakistan is making strides in tackling its social, economic and development challenges”, he said.

Ahsan described Pakistan’s “journey of turnaround” by detailing the efforts the country was making in dealing with security, energy, economic and development challenges. He said that the country’s economic indicators were improving as also was energy and law and order situation. He also expressed the government’s resolve to build momentum on this path to recovery.

Appreciating the development role of UNDP, he said that Pakistan greatly valued its partnership with UNDP and other UN Agencies.

The minister said during the past fifty years, Pakistan and the UNDP partnered on a number of strategic issues starting from the development of Human Development Index by an eminent Pakistani, Dr. Mahbub-ul-Haq. He also appreciated the continued support extended by UNDP to improve public sector governance in Pakistan.

Mr Iqbal emphasized that goals were easy to set but a strong institutional framework and machinery was needed to translate these goals into reality.

He also flagged Pakistan’s extreme vulnerability to the impact of climate change. He said, “Pakistan was among the top 5 most vulnerable countries to climate change and natural disasters despite being a very low greenhouse gas emitter”.

Ahsan Iqbal said that, millions of people are threatened by climate change impact caused by irresponsible growth in the developed world. “”It is their moral, social and economic obligation to support climate actions in developing countries, including building resilience to its impact, he added.

The federal minister urged UNDP to create a strong and effective knowledge sharing platform through which global experiences in the development sector, which UNDP accumulates, was shared with member states and was made available as best practices to all countries.

Pakistan was among only five countries that were asked to speak in the opening plenary of the UNDP’s special meeting, which began with a message from Secretary General Ban ki Moon and address by the head of UNDP, Helen Clark.