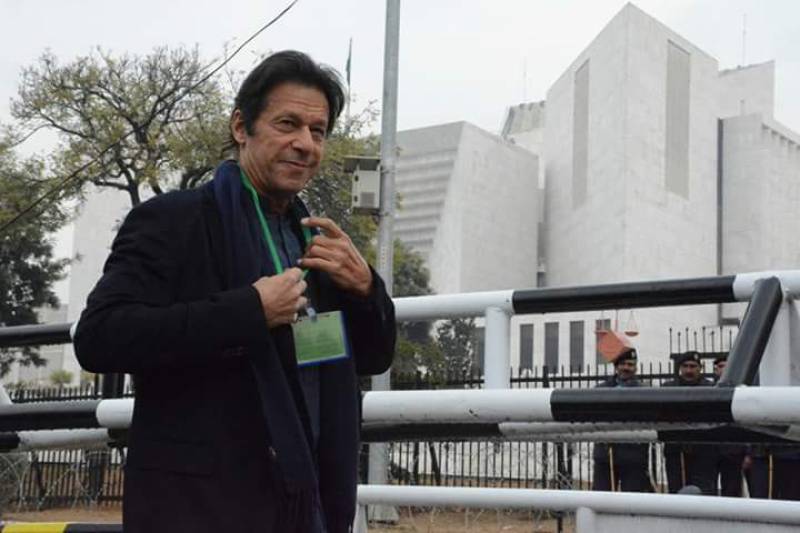 ISLAMABAD - The Supreme Court of Pakistan has adjourned hearing a slew of petitions seeking a probe into Panama Leaks till Thursday.

Shahid Hamid, the counsel for Maryam Nawaz Sharif argued before the larger bench regarding the ownership of offshore companies and London flats.

Shahid kicked off his arguments by expressing that the premier presented himself for accountability before the apex court and for disqualification of any legislator, a writ petition for co-warranto could be filed.

He claimed that a member of national Assembly could not be disqualified on the basis of not filing tax returns as FBR was the competent authority regarding Tax payment.

He reiterated that Maryam Nawaz was not owner of any property adding that Hussain Nawaz was the actual owner of London flats.

Shahid Hamid expressed that Nawaz Sharif in his nomination papers categorically confirmed that he lived with her mother in her home.

Shahid Hamid maintained that there was no dispute among members of Sharif family regarding property settlement after the death of Mian Sharif.

Giving remarks on Maryam Nawaz’s signatures, Justice Ejaz Afzal said that an expert can comment on this issue as judges are not science masters.

Justice Gulzar observed that apparently, there was a difference in the signatures.

Meanwhile, Justice Ejaz asked the complainant’s lawyer to prove from where the documents related to Maryam Nawaz were taken.

He further said that such documents cannot be accepted without verification.

The apex court also sought the transcript of Maryam Nawaz which she gave to a leading television channel.

Justice Asif Khosa remarked that the trust deed inked between members of Sharif family harked back to 2006 whereas justice Gulzar Ahmed remarked that Maryam admitted living with his father.

In his remarks Justice Ijaz ul Ahsan remarked that Maryam Nawaz is accused of being Nawaz Sharif's frontman.

To this Maryam Nawaz's counsel Shahid Hamid said that this allegation has to be proven by the petitioner.

Talking to newsmen during the break, PML-N's representative Maiza Hameed claimed that Imran Khan was scary of Maryam Nawaz. Danyal Aziz also took aim at PTI and maintained that Jahangir Tareen and other members of the party were corrupt.

On the other hand, PTI's fawad Chaudhry said that the ruling Sharif family once again asked apex court not to proceed further on the case. He stressed the need for live broadcast of court's proceedings in order for masses to keep themseleves aware of who was speaking truth or not.

Meanwhile, the apex court adjourned the hearing till Thursday.

Maryam Nawaz on Tuesday submitted her response in the purview of claims by a German newspaper that she was owner of Minerva financial services.

‘I am not the owner of London flats’ stated Maryam in her response adding that she never took any benefit from Coomber company.

She stated that her father Nawaz Sharif showered her with gifts out of his love for her, reiterating that she was not dependent on Nawaz Sharif ever since she got married in 1992.

During the last hearing,  JI’s counsel faced a tough time before the larger bench today due to his rambling and somewhat inaccurate facts.

JI's counsel Toufeeq Asif referred to the case of Zafar Ali Shah once again and expressed that he wanted to put forth the arguments given by Khalid Anwar in that particular case.

To this, Justice Khosa observed that JI’s counsel should state the judgement issued by court instead of the arguments of lawyers.

Justice Azmat Saeed posed a question to JI’s counsel as to whom Khalid Anwar was representing in Zafar Ali Shah case.

Toufeeq replied that he was representing Zafar Ali Shah.

‘You totally made fun of it, you must have read something about it’ said Justice Azmat Saeed told JI’s counsel Toufeeq Asif.

Justice Aijaz Ul Ahsan also threw his weight behind justice Azmat Saeed and observed that JI’s counsel totally made fun of the Panama case as Khalid Anwar was counsel for petitioner instead of Nawaz Sharif.

‘You are ignoring the basic principles of law’ said justice Azmat Saeed to JI’s counsel adding that this had damaged the cause of his client.

To this, Toufeeq Asif replied that he felt as if the larger bench was not in a mood to listen to his arguments.

Justice Azmat told JI’s counsel not to repeat his arguments.

Another JI’s lawyer Ahsan ud Din also argued before the larger bench and sought to summon premeir Nawaz Sharif for clarifying his position.

Ahsan expressed that all the evidence was available to the court and so the responsibility lied with it.

To this, the bench remarked that the evidence could be termed as ‘material’.

The apex court accepted his plea and announced forming a separate bench to discuss formation of judicial commission.