PM Abbasi, COAS Bajwa agree to avoid use of force against Islamabad protesters 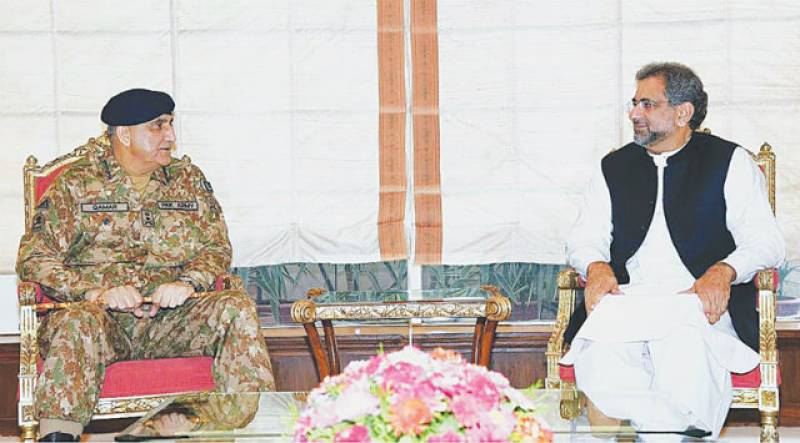 ISLAMABAD - Prime Minister Shahid Khaqan Abbasi and Chief of Army Staff General Qamar Javed Bajwa have agreed that force will not be used to disperse protesters in Islamabad, sources said on Sunday.

During a meeting, the duo exchanged views on the law and order situation matter and tried to formulate a plan of action. Both agreed that the issue should be resolved in a peaceful manner.

They also discussed the issue of whether firearms should be used by army personnel. In its order, the Islamabad High Court (IHC) "restrains [the] use of 'firearms' during clearance operation", as per Item 8 of its "judgment of writ petition number 3914 of 2017". 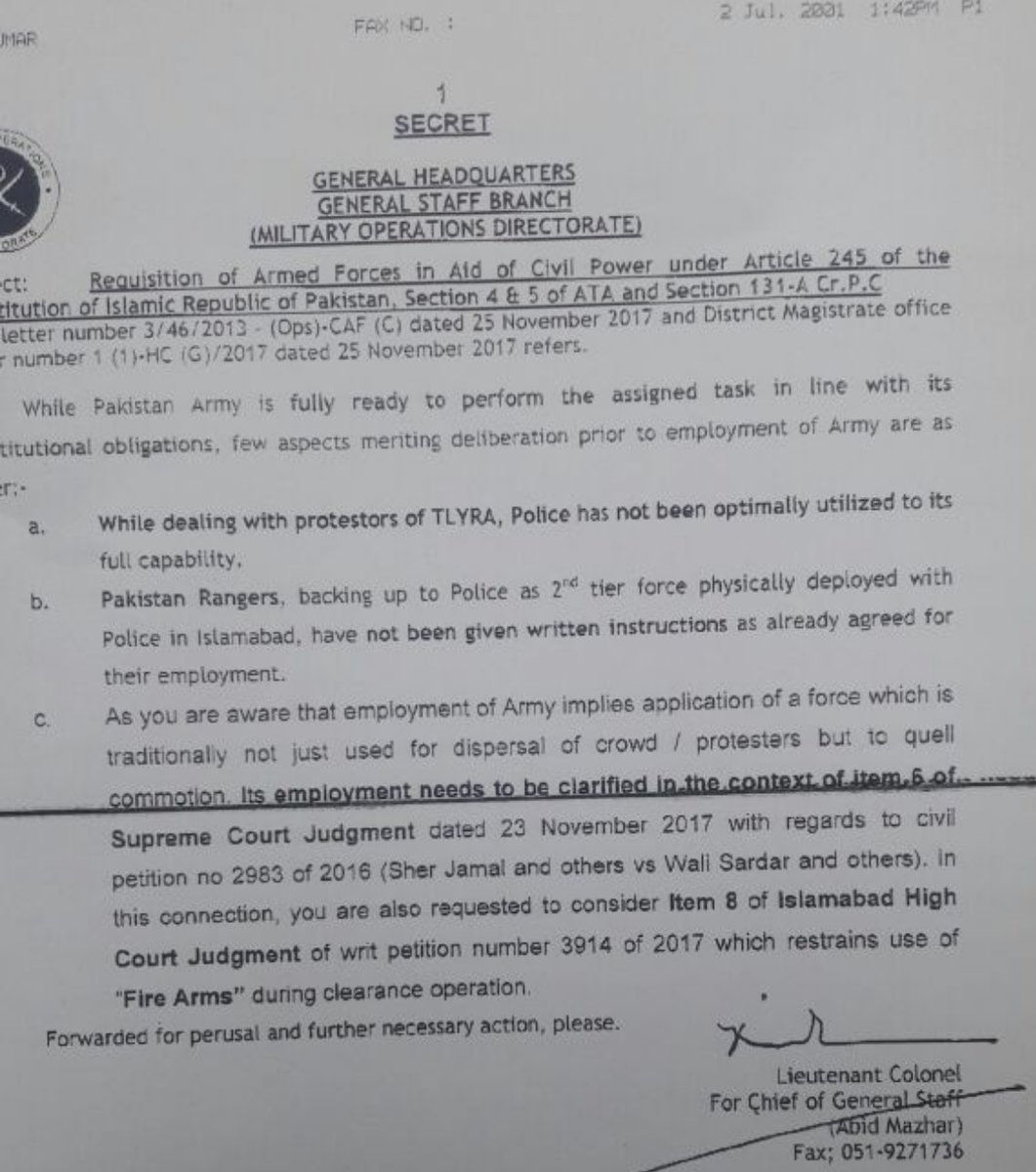 The army chief affirmed that the army will act according to the law and Constitution of the country.

He also expressed concern over restrictions placed on TV news channels and suggested that the prohibition be removed.

General Bajwa also suggested that the findings of the Raja Zafar-ul-Haq committee should be made public.

The move follows the deadly clashes in the federal capital on Saturday, where Islamabad Police along with FC troops launched ‘Faizabad Operation’ to uproot a protest sit-in by Tehreek-e-Labbaik demonstrators.

The operation launched on Saturday morning to disperse protesters at the Faizabad interchange in Islamabad was suspended at approximately 2:30 PM local time. Following the operation, protests were started in major cities of the country. Rangers were called in Punjab to maintain law and order.

The protesters have been blocking the Islamabad expressway, the main road into the capital, since November 8, demanding the resignation of Federal Law Minister Zahid Hamid over a perceived softening of the state's position on blasphemy.

Army was called in Saturday night to restore order to the capital after clashes between the protesters and police left at least six dead, including a police official, and 200 people injured.

KARACHI - Protests erupted on Saturday soon after Islamabad police, with the help of Frontier Constabulary personnel ...

The Ministry of Interior issued Saturday night a statutory regulatory order (SRO) to authorise the deployment of the Pakistan Army to aid civil power to control the law and order situation in the Islamabad Capital Territory.

The SRO — issued in light of the request of the Islamabad Capital Territory Islamabad Administration, dated November 25, issued by the ministry under Article 245 of the Constitution, read along with Sections 4 and 5 of the Anti-Terrorism Act and section 131-A of the Cr.P.C — authorized "the deployment of sufficient number of troops" as "to be determined by the Commander 111 Brigade" in effect from November 25 until further orders.

In response, however, the Pakistan Army said while its troops are "fully ready to perform the assigned task in line with its institutional obligations", there are "few aspects meriting deliberation prior to the deployment".

The police force "has not been optimally utilized to its full capability" in "dealing with [the] protestors", the Army noted.

In addition, "Pakistan Rangers, backing […] police as 2nd tier force physically deployed with police in Islamabad, have not been given written instructions as agreed for their employment."

The Army added that its troops are "traditionally not just used for dispersal of crowd/protestors but to quell commotion".

Therefore, their deployment "needs to be clarified in the context of item 6 of Supreme Court judgment dated November 23, 2017, with regards to civil petition no 2983 of 2016 (Sher Jamal and others vs Wali Sardar and others)".

Thousands of riot police and paramilitary personnel on Saturday morning fired tear gas, rubber bullets and water cannon at the protesters in an attempt to dislodge them from a major highway into Islamabad.

The protesters, numbering as many as 3,000, stood their ground, fighting back by throwing stones and beating police with sticks and metal rods in running battles that continued throughout the day.

By midday, the demonstrators appeared to have beaten back the police to roadblocks located several kilometres away from the site of the protest.

The protests are being held against the change in the finality-of-Prophethood oath in the law when the government passed the Elections Act 2017 last month.

The change - dubbed a clerical error by the government - was immediately fixed as an amendment was passed later.

At least 111 of those injured in the clashes were members of the police or other security forces, said Dr Farrukh Kamal, an official at the PIMS government hospital where most of the wounded were being treated.

Official figures on how many protesters had been arrested during the crackdown were not immediately available.