'You will be served justice,' CJP Nisar assures Mujeeb-ur-Rehman Shami regarding false allegations 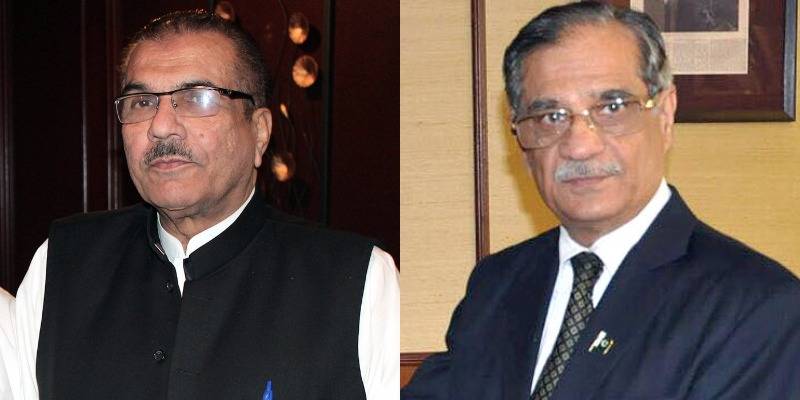 LAHORE - Chief Justice of Pakistan Mian Saqib Nisar has assured renowned journalist Mujeeb-ur-Rehman Shami that he will be provided justice against slanderous allegations of getting land owned by Lahore Development Authority on lease at throwaway prices.

Shami, the Chief Editor of Roznama Pakistan, on Thursday appeared before a three-member bench headed by the Chief Justice in the Supreme Court’s Lahore Registry following a petition filed by a woman lawyer, accusing him of running six petrol pumps on the LDA land against a meager lease amount, Rs15,000.

The journalist maintained that all accusations leveled against him are false and slanderous. He denied owning a single petrol pump.

He informed the honourable court that his sons have a dealership of Shell Oil Company at a filling station, adding that the land was acquired by Shell on the lease.

To which, the chief justice remarked that this is a legal matter, adding, “We want to preserve your dignity”.

“Whether you do respect of someone or not,” CJP Nisar said in a lighter mood. In reply, the renowned journalist said, “I speak every word with great care and own its responsibility”. “Never speak to disrespect someone”.

Shami said that he was informed about the plea against him by a UK-based friend. He pleaded the court to serve justice in the case, besides urging it to cancel the Wakalatnamma of the lawyer for filing the false application.

The applicant told the court that her petition is based on a report broadcast by local media. To which, Shami said that a private news channel had broadcast the report about the petrol pumps, adding, “I contacted the media outlet which later invited me where I denied it”. I was defamed by raising the false allegation against me,” he said.

The chief justice, later, asked the chief editor of leading Urdu newspaper to formally file a plea against it, adding that you will be served justice.

On July 18, The Lahore High Court (LHC) has reprimanded the officials of LDA for sealing the 12 petrol pumps in Lahore despite the court orders.

Justice Jawad Hassan Jawad while hearing a case against LDA’a action of retrieving the filling station on Tuesday night during an operation termed the move contempt of court and illegal.

The government had formed a committee to settle the matters about the lease of the petrol pumps but the LDA authorities sealed the 12 pumps by misusing the powers.

Ordering the authority to unseal the filling stations immediately, the high court has summoned a detailed reply from the LDA and adjourned the case until July 23.

After retrieving the pumps, the LDA officials said that LDA director general constituted special teams, which carried out a late-night operation and took back possession of 13 petrol pumps.

LDA officials said the LDA management has decided to lease out the retrieved petrol pump sites through auction and estimated revenue to be earned from this auction was around Rs 210 million.