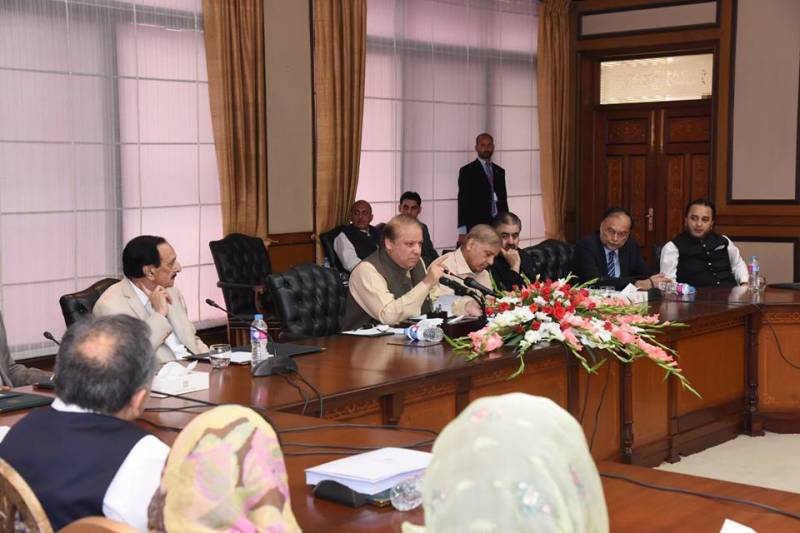 ISLAMABAD - Prime Minister Nawaz Sharif is currently chairing an important meeting prior to the announcement of Panama case verdict, here on Friday.

According to sources, legal aides, advisors and federal ministers are present at the PM House where Prime Minister Nawaz Sharif will listen to the verdict of the Panama Papers case through television in a short while.

Highly placed sources disclosed the prime minister is satisfied and confident that the verdict will be in his favour and his woes would end after today's announcement by the top court.

Scores of PML-N leaders have stated that the government wants the parliament to complete its tenure. Railways Minister Khawaja Saad Rafique claimed that Panama papers was a conspiracy hatched internationally.

The decision of the Panama Papers case will be announced by the original five-member bench that heard the landmark case from January this year. The bench headed by Justice Asif Saeed Khan Khosa is expected to announce the verdict at 11:30 am.

A huge leak of hidden files from a Panama law firm had revealed the involvement of many of the world's political players in financial wheelings and dealings.

In the leaks, Russia’s Vladimir Putin, the king of Saudi Arabia, Iceland’s prime minister and the family of Prime Minister Nawaz Sharif were named, along with dozens of others.

The PM’s children Maryam, Hassan and Hussain “were owners or had the right to authorise transactions for several companies”.

Mariam is described as “the owner of British Virgin Islands-based firms Nielsen Enterprises Limited and Nescoll Limited, incorporated in 1994 and 1993”.

The Supreme Court took up the Sharif family's case in November last year after the main political parties failed to agree on a committee to probe the April 2016 Panama Papers leaks, and Pakistan Tehreek-e-Insaf (PTI) Chairman Imran Khan threatened mass protests and to ‘shut down Islamabad’ in protest on November 2.

In a 62-day-long investigation, the team interrogated eight members of Sharif family, SECP head, NAB chairman, other officials, and travelled out of the country to collect information.

On June 15, Prime Minister Nawaz Sharif appeared before the team and recorded his statement for over three hours. Talking to newsmen after the appearance, the premier claimed that his family faced accountability in the past as well.

PM's elder son, Hussain Nawaz made six appearances before the team to record his statements.

Hassan Nawaz appeared before the investigation team three times, while Maryam Nawaz made only one appearance.

Qatari prince who sent a letter in favour of the Sharif family to the Supreme Court could not appear before the JIT as he refused jurisdiction of the team.

Nawaz Sharif is the 12th time Prime Minister of Pakistan, currently serving his third term. He has been in office since June 2013. He has previously also served as the Prime Minister from 1990 to 1993 and from 1997 to 1999.

He was elected as the Chief Minister of Punjab in 1985 and re-elected after the end of martial law in 1988.