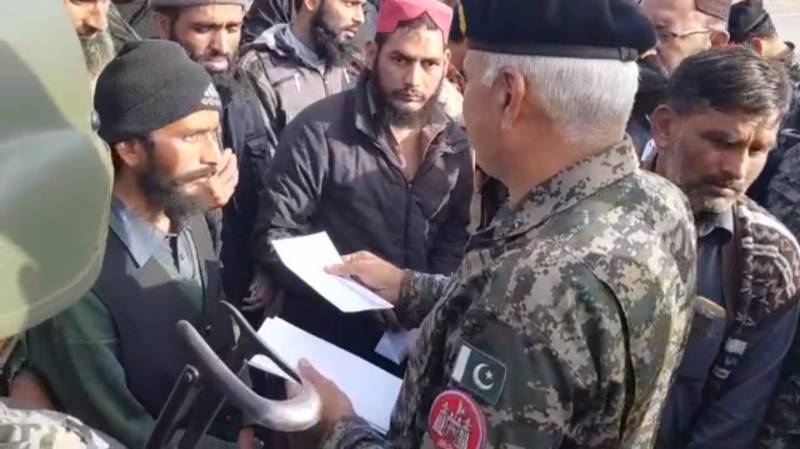 ISLAMABAD - Footage of Director General Rangers Punjab Maj-Gen Azhar Naveed went viral after the Faizabad sit-in was called off on Monday, showing him distributing cash among the freed workers of religious groups.

The 36-seconds clip which was widely shared on social media platforms showed the senior officer of Rangers handing out cash in envelopes to the workers of Tehreek-e-Labbaik Pakistan and other groups who were taken into custody during the operation to vacate the Faizabad interchange.

Pakistan Rangers Punjab DG Maj-Gen Azhar Naveed hands out envelopès with a token Rs1000 as goodwill to members of Tehrik Labbaik Ya Rasul Allah who were recently released from detention following the government's agreement with the protesters pic.twitter.com/hQMLdZsxqW

As soon as the clip went viral on the internet, social media buffs and analysts took aim at the state institution for rewarding the workers who had practically besieged the capital city, however, the reality of the complete 'Lifafa' episode depicts a completely different story than narrated on social media.

According to political commentator Taseer Akram Rana, the cash was handed over to the religio-political workers on their request as they had to return back to their homes and they had run short of money.

Moreover, he claimed that the top Rangers official handed over the cash from his own pocket, without inflicting any loss to the national exchequer adding that a chunk of the video clip was intentionally removed in which the protesters could be seen putting a request for some cash.

The analyst claimed that uploading a specific portion of the clip was a bid by Pakistan's arch-rivals to malign the armed forces, who were playing a pivotal role in weeding out terrorism from the country .

The religious groups who had staged a sit-in against the amendment in the Khatam e Nabuuwat clause in the recently passed Election Act 2017 came to an end hours after the Pakistani government and Tehreek-e-Labbaik struck a deal – brokered by the Army – putting an end to the escalating wave of tension across the country.