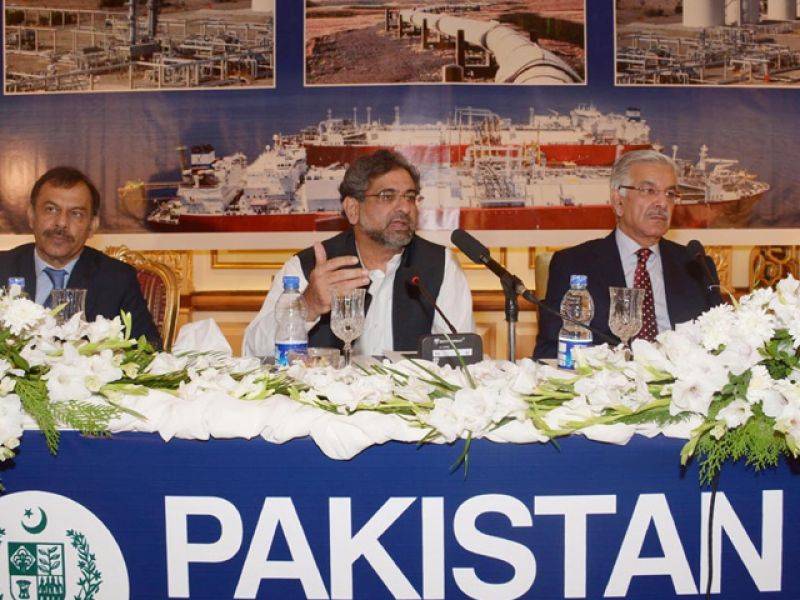 He categorically rejected media reports alleging non transparency in the construction of LNG terminal at Karachi Port on BOT basis and declared that 15 year LNG Import deal concluded with Qatar Government is one of the most favorable in the region.

He was speaking at a seminar organized by his ministry to apprise industry professionals and media personnel about the Government LNG Policy and its execution mechanics.

It was learnt that the seminar was organized at the behest of the Prime Minister Office to allay concerns, aired frequently in media, about the LNG import procedure and bring forth more transparency to the whole process. Mr Khawaja Asif, Federal Minister for Water and Power was also present at the occasion.

Senior officials of the ministry gave detailed presentations on the structure of International LNG Market, dynamics of Pakistan’s Energy Sector and Procurement and Distribution Mechanism of LNG in domestic market. Mr Abbasi in his speech summarized the process adopted for the construction of LNG terminal and for the procurement of LNG on long-term basis.

Mr. Abbasi said that successive governments repeatedly failed to build the LNG terminal, however PML N Government was successful because of its unbundled approach, where construction of LNG Terminal and Import of LNG were dealt with separately.

The minister also said that increasing the share of LNG in Energy mix is the cornerstone of Government Policy and at present Pakistan faces a gas shortage of 2 BCFD against the demand of 6 BCFD. He added that this shortage is envisaged to be bridged through import of 2 BCFD LNG in the next three years.

“For this purpose 4 new LNG terminals have to be built, as this one can only handle one fifth of the total estimated shortage”. He denied the impression that the government was being heavily overcharged for utilizing gasification facilities at the LNG terminal and said the average tolling tariff of $ 0.66 MMBTU was one of the lowest in the world.

He said that the total cost of the terminal was around $ 200 million, however pay back was not exceptionally high, contrary to the general impression. It may be mentioned that government will be paying $ 90 million per annum as minimum capacity charges to the LNG Terminal.

Mr Abbassi following up on the presentations given by Secretary Petroleum and other senior officials elaborated on the differences between the International Oil Market and LNG market and said that in the LNG market production is undertaken after the sale, unlike Oil market.

“The government has to enter into a long term contract for purchase of LNG, as there are few suppliers and bulk of the sale in LNG market is made on long term basis”. He also added that mostly price of LNG moves in tandem with Oil prices and is calculated as percentage of Brent Crude Oil.

He said that deal with Qatar was made because it supplies 30 % of the world’s LNG and has close geographical proximity to Pakistan. He also said that Iran Pakistan gas pipeline will add 700 MMCFD gas in our network but the pipeline is not scheduled to be completed before the end of 2017.

The participants were also briefed that 14 Cargoes of LNG have already arrived at an average cost of $ 7.635 / MMBTU. In answer to a query it was informed that all these Cargoes have been purchased either from Spot Market or through bidding process and agreement with Qatar Gas has not been initiated yet.

The gathering was also informed that OGRA has fixed a price of $ 8.64 / MMMBTU for LNG for end consumers which will initially include Power, Fertilizer and CNG sectors.

Answering to another query regarding logic of entering into long term contract, as price revision will take place after 10 years, for purchase of LNG when the market is expected to witness excess supply in coming years, the Minister responded that it’s hard to predict the scenario in coming years and calculations can change overnight.

Responding to another question, Mr Abbasi said that deregulation of the LNG import will be done in time. However at present it is felt that PSO is the most experienced entity to handle the imports of LNG. The participants emphasized that deregulation will bring more transparency in the process.

Mr Abbasi also added that increased LNG usage in Power and other sectors will result in billions of dollars in savings in coming years.