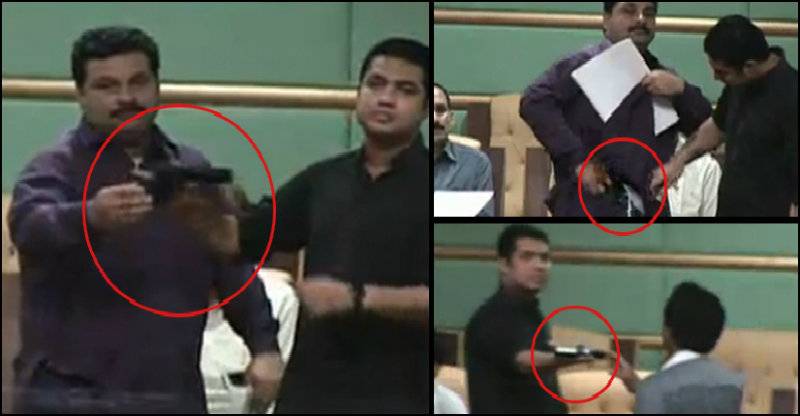 KARACHI (Web Desk) - Security guards arrested a private television channel's team from Sindh Assembly premises on Friday after one of them took out a gun inside the house apparently in order to expose security lapses.

In a sting operation, ARY News anchor Iqrarul Hasan entered the assembly building along with one of the crew members carrying a pistol, without being checked by the security guards. Once inside, he presented the weapon before the speaker, shocking the lawmakers.

“How grenade works”: Judge among three injured after constable pulls the pin inside courtroom

Sindh Interior Minister Suhail Anwar Siyal, instead of addressing the opposition's concerns, requested the speaker to order the arrest of the armed man and his team members.

"I request you to order the assembly's security staff to keep them in detention until police arrive to arrest them for the crime," Siyal asked Speaker Agha Siraj Durrani.

Durrani ruled that no one including journalists would be allowed to enter the assembly without undergoing security check from this point on.

ARY News anchorperson Iqrar carries out a sting... by arynews

His order was followed by detention of Iqrar and his team as security personnel at the Sindh Assembly encircled the anchor and took him out of the hall. He was later arrested by the police and was moved to Arambagh Police Station.

Speaking in the House, Sindh Home Minister Sohail Anwar Siyal said inquiry will be conducted on the matter. He constituted a committee headed by DIG South to probe the matter. The minister also suspended security in-charge of the Sindh Assembly.

Opposition leaders were critical of the provincial government and those responsible for the building's security.

Muttahida Qaumi Movement (MQM) MPA and Leader of the Opposition in the Sindh Assembly Khawaja Izharul Hasan questioned the speaker about insufficient security arrangements for the assembly building "which is already receiving threats from banned organisations".

"The Sindh government is spending millions for the security of the house but an armed man is not only able to sneak into the house but stay there with ease," Izhar remarked.

The incident also sparked a debate on Twitter, where social media users supported the TV anchor and appreciated his efforts in raising social issues.

Sarr-e-Aam's Anchor Iqrar ul Hassan, Thankyou for what you are doing for us Pakistanis.

What happens if an MPA or an aide carries a weapon & uses it agnst another MPA in the assembly in the heat of the moment? #sindhassembly 2/3

I have great respect for Iqrar ul Hassan as he consistently & continuously exposes Govt's complacency & incompetence. He's a brave man 3/3