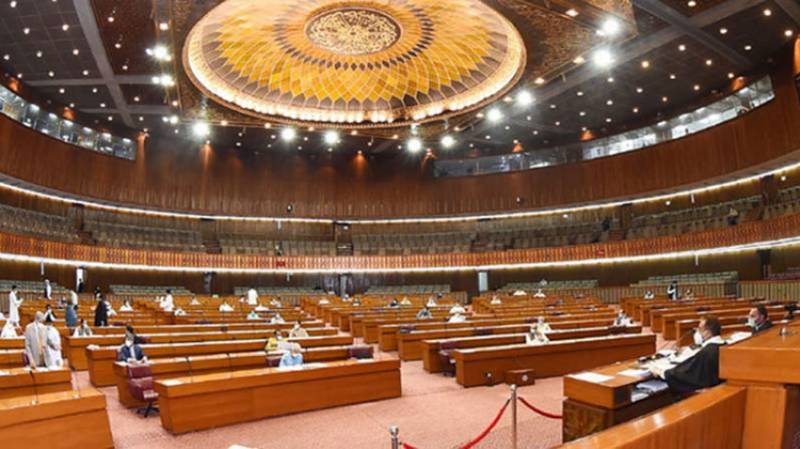 The legislation is related to fulfill certain requirements of the Financial Action Task Force in order to bring Pakistan out of FATF’s grey list.

The legislation is also aimed at empowering the federal government to direct authorities in Pakistan to implement various measures in complaiance with the UN Security Council resolutions including the freezing and seizure of assets, travel ban and arms embargo on the entities and individuals, who are designated on the sanctions list of the United Nations.

It is worth mentioning that the UN Security Council Resolution 1373 requires member states to implement counter terrorism measures, especially countering the financing of terrorism through their domestic laws.

This obligation is implemented in Pakistan through Anti-Pakistan Act, 1997.

The National Assembly was informed today that around 95 percent of stranded Pakistanis have been brought back home in about two and a half month in the wake of COVID-19 pandemic.

Responding to a question during “Questions Hour”, Parliamentary Secretary on Foreign Affairs, Andleeb Abbas said that about 250,000 stranded Pakistanis were repatriated from across the world, while majority of Pakistani Zaireen have returned from Iran.

She said that around 25 Zaireen are still living in Iran with their relatives and friends at holy cities of Qum and Mashhad. She said holy shrines in these cities are currently closed due to the second wave of COVID-19.

Andleeb Abbas said the remaining Pakistani Zaireen are likely to return to Pakistan by next flight of Iran Air tomorrow and through Taftan border.

The Parliamentary Secretary said that the Pakistan Embassy in Tehran and Consulates in Mashhad and Zahidan are in constant touch to ensure wellbeing and return of Zaireen to Pakistan.

Replying to a question, Minister for Energy Omar Ayub Khan said the government wants to hold a thorough investigation into the fuel shortage, occurred during the last month, so that the elements involved in hoarding and creating artificial scarcity of petrol could be brought to task.

He said a commission has already been formed by the Federal Cabinet in its last meeting to probe into the matter.

Minister for Communication and Postal Services Murad Saeed said there will be no compromise on accountability and no NRO will be extended to anyone.

Speaking in the National Assembly, he said it is regrettable that the opposition wanted NRO plus for extending support to an important legislation meant for national interest of the country.

The Minister said no concession will be given to those who have plundered Pakistan.

The House has now been prorogued.