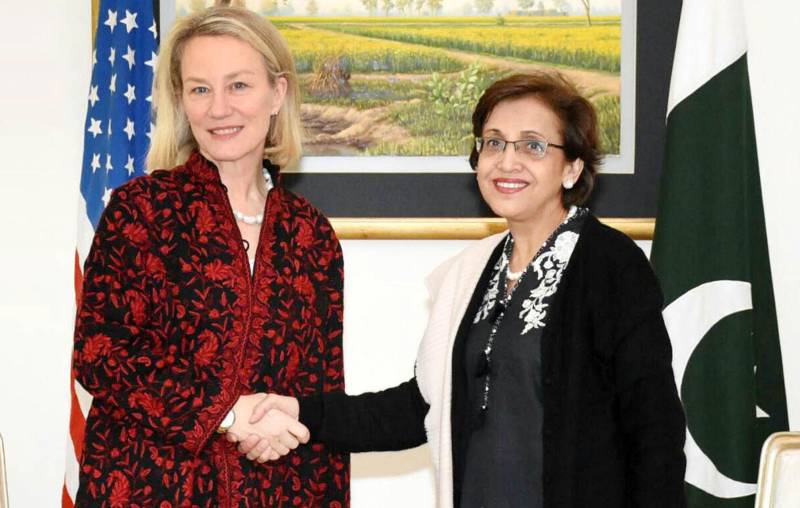 ISLAMABAD - The Acting Assistant Secretary of State for South and Central Asian Affairs Ambassador Alice G. Wells has noted that the United States and Pakistan had a long track record of cooperation, and also emphasized the importance of working together to achieve the common objectives of peace and stability in Afghanistan and the region.

The ambassador Alice G. Wells made these remarks when she met the Foreign Secretary Tehmina Janjua at the Ministry of Foreign Affairs in Islamabad on Thursday during her second visit to Pakistan in 2018, aimed at continuing the conversation to strengthen bilateral relations and promote peace & security in the region.

Amb Wells calls on the FS at MOFA today pic.twitter.com/lSqjiPBlpT

During the meeting, the two sides reviewed bilateral relations and discussed regional issues particularly Afghanistan. The two sides agreed to continue bilateral engagements at all levels.

Both sides agreed that the momentum of the peace initiative unveiled in Kabul by the Afghan President Ashraf Ghani and followed up in Tashkent needs to be carried forward.

Mechanisms for the return of refugees and strengthening border management were also discussed.

Both sides also reiterated their firm commitments to act against all groups that target Pakistan and Afghanistan.

Tehmina Janjua also apprised the visiting delegation of the continued ceasefire violations by India that undermined the stability of the region. Pakistan’s position that a comprehensive dialogue was the only way forward for civilized nations to resolve outstanding issues was reiterated.