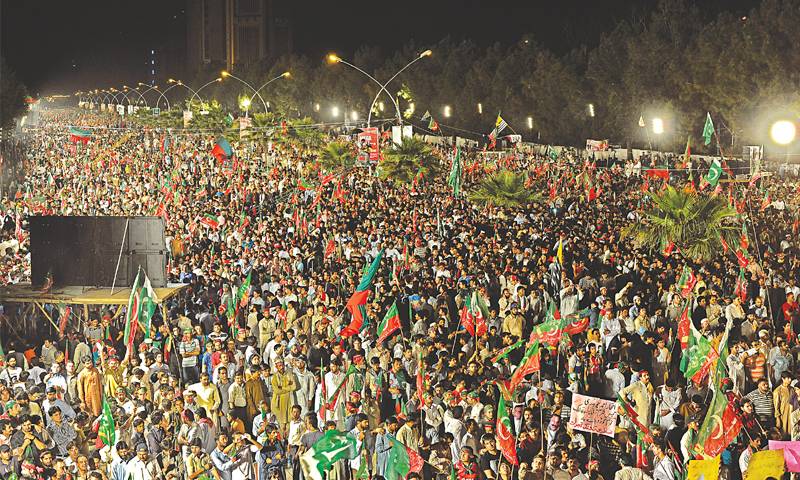 Speaking to the thousands of supporters gathered at the celebrations, the PTI chairman thanked his party workers, especially the female party workers. "I am glad that women are playing an active role in making a new Pakistan," he said, remembering his late mother and crediting her for teaching him to "stand firm for the truth and justice".

Imran Khan paid tribute to the five judges of the apex court and the joint investigation team (JIT), saying, "I salute the JIT members; I know how much pressure you have handled."

Asking the crowd to imagine a "naya Pakistan," Khan promised that under PTI’s leadership, the National Accountability Bureau would not wait for the government’s orders to take action against criminals. “I will make an autonomous Federal Board of Revenue and empower all institutions.”

Promising to implement merit-based employment on all levels, he said there would be "meritocracy" in naya Pakistan. He also discussed the case against him in the court, saying, “I will resign from the party if a single sentence of my statement before the judiciary is proven false.”

Lashing out at Nawaz Sharif for his alleged money laundering, Khan warned Pakistan Peoples Party’s Asif Ali Zardari and Nawaz Sharif's ally Maulana Fazlur Rehman that it was their turn next for accountability.

“It was hurtful when they [PML-N] levelled allegations against the Shaukat Khanum hospital,” added Khan. “Why didn’t they take action if they had spotted discrepancies in the affairs of the hospital?”

The PTI chief is accompanied by party leaders, including Shah Mehmood Qureshi, Jahangir Tareen, and Asad Umar, along with Awami Muslim League's chief Sheikh Rashid Ahmed, who are also expected to address the thousands of PTI supporters gathered at the ground.

While addressing the gathering, Asad Umar said that the struggle which started against four flats ended on four iqamas.

He also blamed Nawaz Sharif for amassing the burden of loans on the people of Pakistan. "The debt is a national security risk for the country," he said.

After Nawaz Sharif's four years in government "the income of Pakistan has reduced and losses have increased", Umar added.

People everywhere, all one heart one soul, for #YaumETashakur pic.twitter.com/pMCpbISKmk

Three entry points have been established at the Parade Ground; one for media, one for VIPs and one for the general public.

Pakistan Tehreek-e-Insaf's all tier leadership has begun to arrive at the Jalsa Gah! #YaumETashakur pic.twitter.com/R9YloLuuVs

Permission to hold the public gathering was sought in writing from the federal capital administration by PTI Islamabad chapter president Raja Khurram Nawaz, after which the administration issued a no-objection certificate (NOC) to the PTI for holding the rally between 4pm and 10pm.

An official of the police said over a 1,000 personnel are performing security and traffic duties during the event.

On Friday, following the apex bench's landmark verdict in the Panamagate case, Khan had termed Nawaz Sharif's disqualification as the prime minister "a victory for Pakistan", announcing to hold a Youm-i-Tashakkur (day of thanksgiving) gathering on July 30.

"Pakistan has won today," Khan had said, adding that he had no personal agenda against Nawaz Sharif. "I have known his family for 40 years, he did not take anything of mine — he had done wrong to the people of this country and that was why we wanted him to be held accountable."