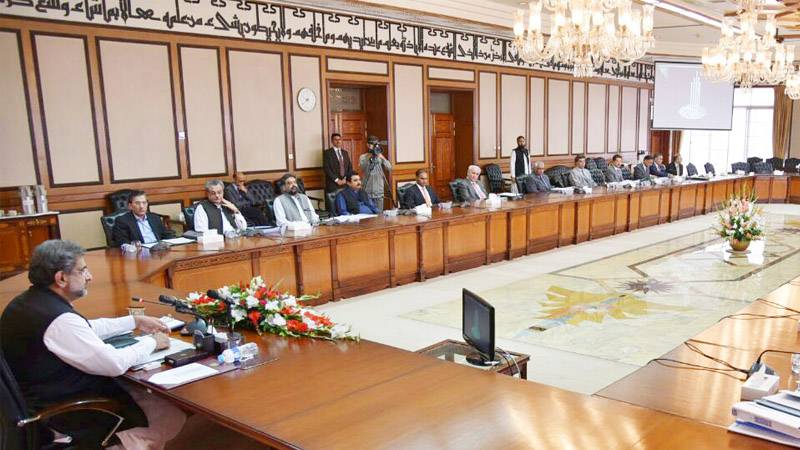 ISLAMABAD - Prime Minister Shahid Khaqan Abbasi chaired a meeting of the Federal Cabinet at the PM Office on Wednesday.

The following agenda items were approved by the Cabinet:

• MoU between the Ministry of Foreign Affairs of Pakistan and Republic of Sao Tome and Principe on Bilateral Consultation.

• Approval for Signing of Executive Programme of Cultural Agreement between the Government of Islamic Republic of Pakistan and the People’s Republic of China for the year 2018-2022.

• Ratification of the Decisions taken by the Cabinet Committee on Energy (CCE) in its meeting held on 12-12-2017.

• Ratification of the Decisions taken by the Economic Coordination Committee (CCE) of the Cabinet in its meeting held on 29-12-2017.

• Ratification of the Decision taken by the ECC of the Cabinet in its meeting held on 05-01-2018.

The Cabinet approved the grant of 60 days extension in the Proof of Registration (POR) Cards for Afghan Refugees.

Chairman HEC informed the Cabinet that the Scheme would be extended to 114 districts in various parts of the country including Balochistan, Sindh, Khyber Pakhtunkhwa, South Punjab, FATA, Gilgit Baltistan and AJK.

Appointment of Protector of Emigrants, Rawalpindi, and Peshawar was also approved by the Cabinet.