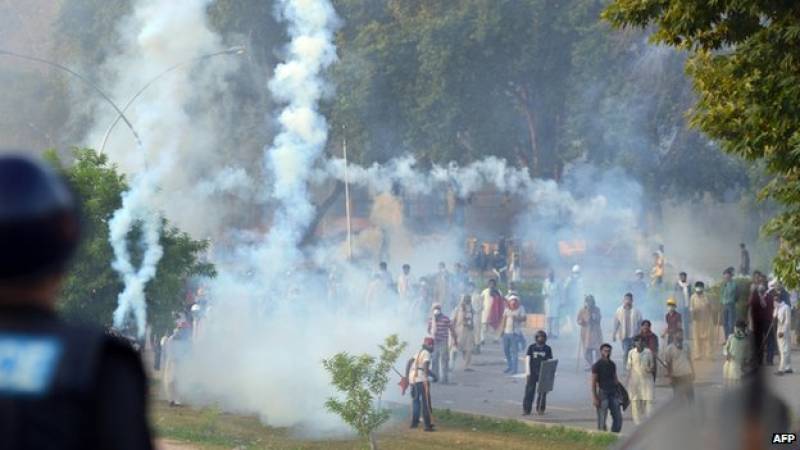 ISLAMABAD - Police have tear-gassed the PTI workers who are in a final push to reach the federal capital and being led by KPK Chief Minister Pervaiz Khattak.

Clashes erupted between security personnel and PTI workers when the Khattak-led convoy was close to entering Punjab near the Swabi Interchange, according to media reports.

The PTI workers and supporters are trying to reach Bani Gala, residence of Imran Khan, from where they would launch a massive movement to lock down Islamabad on November 02.

In Hazro, police started shelling upon the party’s workers, who retaliated by hurling stones at policemen.

Enraged protesters also set multiple vehicles and bushes in the area on fire in Hazro, Motorway.

Meanwhile, the government has also enforced measures to deal with PTI workers reaching Islamabad. Containers have been brought to Islamabad to seal the Red Zone.

Before the rally kicked off from Swabi, CM Khattak had asked the party workers not to worry as he would be at the front, adding that the convoy will move forward removing all hurdles.

“If we fail to reach Islamabad today, we will reach there tomorrow,” Khattak told his party workers on Monday evening.

Earlier, police used tear gas shelling to disperse the PTI's convoy led by CM Khattak, stating that they would not be allowed to proceed to Islamabad.

Police alleged that PTI workers were using cranes to remove containers. Meanwhile the Motorway connecting Khyber Pakhtunkhwa to Punjab has been sealed with containers.