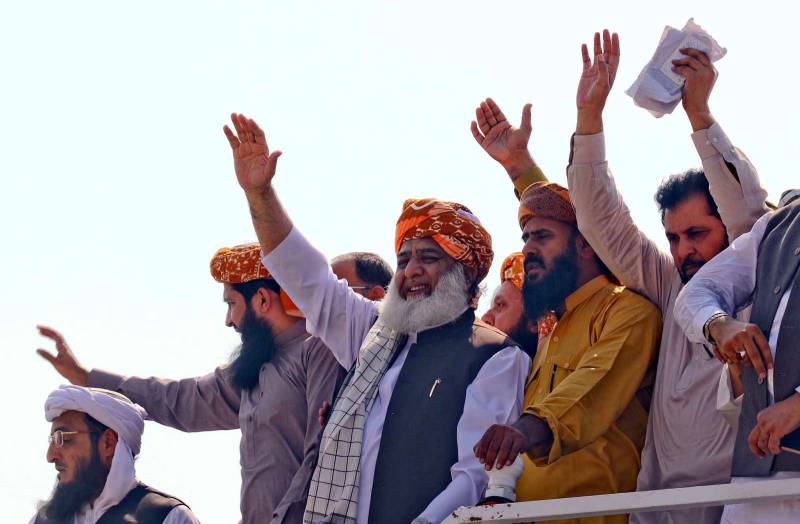 Earlier in the day, the JUI-F ameer said that no changes have been made in the schedule of the so-called Azadi March caravan, dismissing the rumours about postponing it due to the Rahir Yar Khan train tragedy.

Addressing the rally in Gujar Khan, Fazl said that confusion was being ignited about the caravan. He said, "The caravan is a procession and also a sit-in". He announced that they will reach Islamabad as per the schedule. There will be staged a power show today as well tomorrow (Friday).

The leadership of main opposition parties including JUI-F, Pakistan People’s Party (PPP), Pakistan Muslim League-Nawaz (PML-N), Awami National Party (ANP) and others have joined hands with Fazl against the government.

Earlier in the day, Pakistan Muslim League-Nawaz (PML-N) spokesperson Marriyum Aurangzeb said that the protest rally has been postponed till Friday due to the Tezgam Express tragedy, which has claimed 74 lives so far.

However, PPP spokesperson has announced that party Chairman Bilawal Bhutto Zardari will address the rally today in Islamabad as per the schedule.

The ANP has criticised the PML-N for spreading confusion about the Azadi March as its chief Asfand Yar Wali claimed that the PML-N was making propaganda against the rally.

According to media reports, a massive public meeting will be held at H-9 area in Sunday bazaar grounds near Peshawar Mor.

The government has allocated space for the protestors at H-9 Sector of the federal capital.

The section of Azadi March coming from the Motorway will use the Kashmir Highway, and these roads will be closed when the rally nears. The Red Zone has been partially sealed and entry into this area has been restricted until the march concludes.

According to sources, the participants of Azadi March coming from Punjab will be diverted to Islamabad Expressway from T-Chowk, Rawat to Faizabad. From there they will head towards Peshawar Morh.

Meanwhile, the rallies from Khyber Pakhtunkhwa will be diverted to Kashmir Highway, while rallies from Murree and Azad Kashmir will reach Faizabad and then take 9th Avenue to reach the venue.

A traffic plan has also been issued by the Islamabad Traffic Police to avoid inconvenience to the commuters. However, all routes in Rawalpindi and Islamabad are open and there is no restriction on the movement of people.

On the other hand, all the government and private schools, colleges and universities in Rawalpindi will remain closed today.

Strict security arrangements have made by the authorities in the federal capital to avoid any untoward incident.

During a meeting yesterday, it was decided that the government will not create any hurdle in the way of JUI (F)'s march but nobody will be allowed to take the law into his hands.

Earlier, Fazl addressing the rally in Multan stated that they will not step back as the ‘war has begun’. He reiterated that they are fighting a political war as there is a danger to the Constitution of Pakistan.

He also urged the political elite to resign before the Azadi March reach the federal capital.

The participants of the JUI-F-led march from across the country will gather near Tarnol before entering Islamabad on October 31. The protest demonstration at the end of Azadi March will be held at Peshawar Morr in Islamabad, as it was agreed by the JUI-F in negotiations with the government.