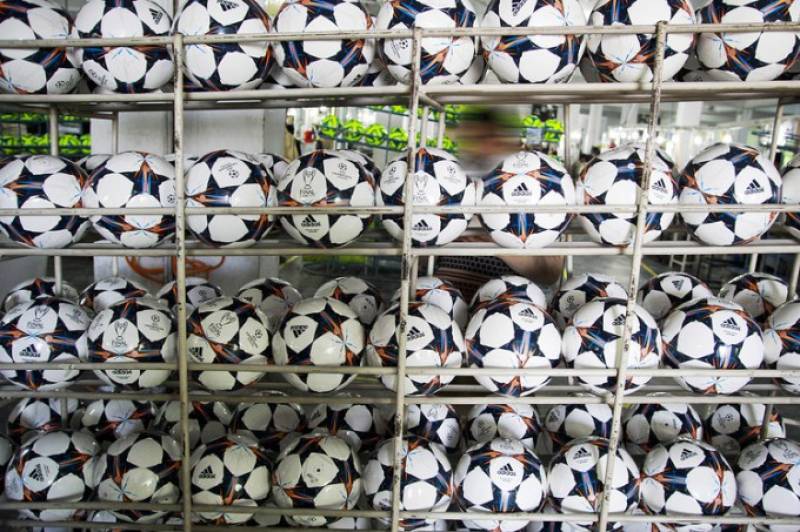 LAHORE (Staff Report) - Small and Medium Enterprises Development Authority (SMEDA) Tuesday claimed to have saved local football industry from losing its share in International market by establishing a Sports Industries Development Center (SIDC) at Sialkot with the support of federal government that provided Rs 436 million to execute the project.

Sialkot was catering to around 70 percent of total world demand of hand stitched inflatable balls, which translate into around 40 million balls annually by providing direct employment facility to over 200,000 individuals, the SMEDA officials said.

The SMEDA officials said, the sports goods sector, coupled with multiple challenges, was facing the major threat in the form of Mechanized inflatable ball, which uses medium end technology to produce a ball having most of the characteristics of hand stitched ball.

This new ball has been tested and played in a number of international football tournaments including UEFA EURO 2004. While, an improved version of this ball was used in the FIFA World cup held in 2006.

They mentioned that SMEDA during its interaction with sports sector stakeholders, chambers and other relevant institutions, identified the problem requirement and developed a project that would provide a long-term solution that has a potential to be a game changer for the local industry.

As a standard proactive for development interventions, SMEDA joined hands with Sialkot Chamber of Commerce, sports industry stakeholders, and other development partners and after extensive consultations, research, review of best practices and comparison of available technology options, proposal was initiated for seeking government funding for establishment of a common facility for production of mechanized ball so that Pakistan remains competitive in the world sports market.

SMEDA officials said, the SIDC is a core initiative in the strategy of infusing Mechanized inflatable ball technology in the local industry.

The centre has started trial operation as a common facility where local manufacturers/exporters have started bringing their material and using the available machinery to produce high quality products.

They said, the center will be able to create around 12,600 jobs as a result of its services over a period of 10 years.

Since the center possesses high end machinery and equipment that is not locally available to the SMEs, the workers and technicians of the SMEs will be trained for production of high quality mechanized balls.

The project is also in the process of engaging foreign experts for training of the local industry.

Still technology for production of Butyl bladders is needed and under trial. However, the centre has produced 300,000 bladders till date assisting in generation of export revenue of Rs. 240 million.

It is encouraging that the Project has started trial production of various types of balls in coordination with the local industry and has so far produced more than 20,000 balls for the private sector.

More than 20 private companies are engaged with SIDC for their export related production requirements.

The project is also striving hard for development of FIFA standard thermo balls for the foreign markets.

Establishment of Product Development Centre for Composites Based Sports Goods is also under consideration and requisite land is already available with SIDC.