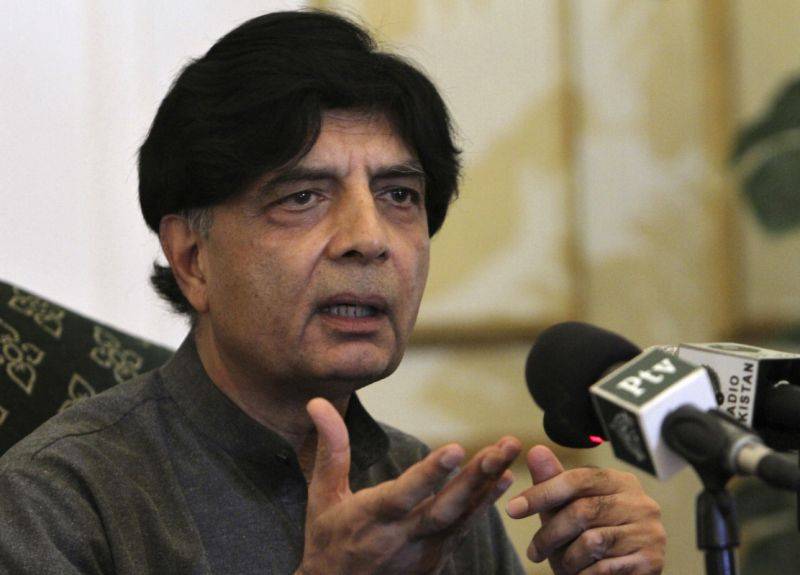 RAWALPINDI - An intelligence report sent to the Islamabad chief commissioner has revealed that the policemen opened fire on protesters belonging to different religious groups to stop them from breaking into the residence of former Interior Minister Chaudhry Nisar Ali Khan.

The report which was compiled on November 25 states that the firing left four people critically injured who were subsequently shifted to Benazir Bhutto Hospital for treatment, without revealing further details about the injured.

In their situation report, Special Branch officials maintained that at least 90-100 police personnel were present inside the former minister’s residence when around 1,500 protesters attacked the police party, which retaliated with teargas.

An interesting aspect unfolded after the emergence of report is that the Rawalpindi City Police Officer Israr Ahmed Abbasi had denied the impression that police were allowed to carry firearms or even rubber bullets during the operation against protesters at Faizabad, contrary to the report.

The situation report also suggested that police encountered 1,600-1,700 protesters in I-8/4 around 7am, who dispersed when police started a hot pursuit.

'Protesters also managed to ‘detain’ 14 Frontier Constabulary (FC) personnel inside a house I-8/4 who were later freed' it said.

The report continued that when the police force reached Faizabad Bridge around 7:45 am, a group of protesters appeared from Dhoke Kala Khan and Sohan village and started pelting them with stones.

The Special Branch report highlighted that as police personnel moved towards Sohan bus stop, around 300 demonstrators started running after them and started throwing stones adding that some policemen, including Inspector Abdul Jabbar, were also beaten with batons.

The report detailed how the police force and FC personnel moved towards I.J. Principal Road from Faizabad, which allowed the protesters to occupy Islamabad Expressway.

'Two police motorbikes were set on fire by protesters under the Sohan pedestrian bridge' the report continues.

Regarding the violent protesters who set police mobile on fire, the report outlined that at 9:40am, a police vehicle parked near Tramari Chowk was damaged by violent protesters, who also set alight a make-shift tent and threw the teargas shells lobbed by police inside them to neutralise the fumes.

'At 5:30pm, the police check point near Jungle Hotel in Golra was set upon by 20 protesters, who set their equipment on fire' mentioned the report.

The report revealed that two FC vehicles with personnel on board was peppered with stones and gunfire near Mumtaz Qadri’s grave in Bhara Kahu. However, none of the FC personnel was injured or hurt.

Let it be known that the former security czar has already denied claims that four of those who died in the violence that broke out on Saturday were shot by policemen outside his house.

Chaudhry Nisar had lashed out at his successor, Ahsan Iqbal, for making 'baseless claims' regarding the deaths of protesters outside his residence.

In a statement after botched operation, Mr Iqbal had said that no one was killed during the police action, and that the deaths occurred when the mob started attacking private properties, including the former minister’s house.

Giving a rejoinder to his fellow Pindiite, Chaudhry Nisar said that the minister was just trying to cover up his own incompetence.