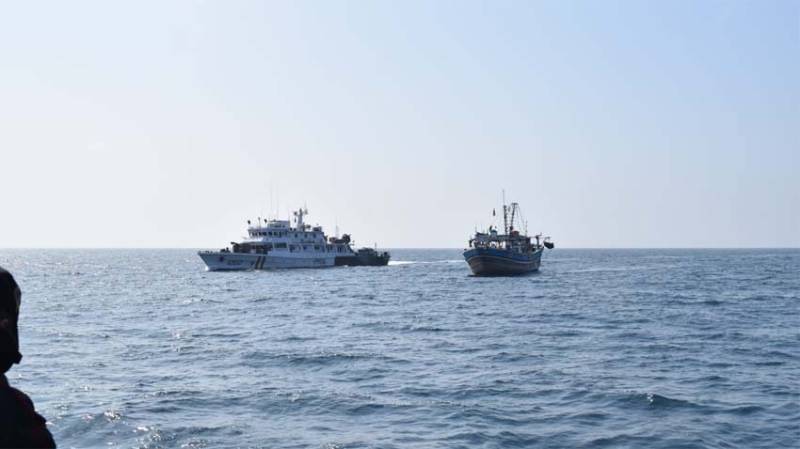 A statement issued by PMSA said that the vessel namely Tulis Maiya along with seven crew members has been taken into custody.

The agency regularly patrols Pak EEZ, to ensure the protection of its own fishermen while ensuring no foreign fishing vessels conduct poaching inside our EEZ.

“On 28 Jan, the PMSA Ship observed the Indian fishing vessel poaching inside Pakistani EEZ and warned its crew but it did not respond and continued poaching,” it said in a statement.

PMSA said that the Nakwa of the Indian fishing vessel made an evasive and dangerous manoeuvre after seeing approaching Pakistani forces’ ship.

On 28 January 22, during routine patrolling in Pakistan EEZ, PMSA Ship apprehended one Indian fishing vessel namely TULSI MAIYA with 7 x crew onboard, which was engaged in poaching.

Nevertheless, PMSA successfully apprehended the boat after chasing it down and compelling it to stop in the name of law.

The PMSA unit then closed the vessel. After seeing approaching PMSA ship, the Nakwa of the Indian Fishing vessel made evasive and dangerous manoeuvre. Neverheless, PMSA ship successfully apprehended the boat after chasing it down and compelling it to stop in the name of law. pic.twitter.com/nukALLslVF

The boat has been brought to Karachi for further legal proceedings as the act is clear poaching of rich resources of Indus Delta, violation of Pakistani law and UN Convention on Law of the Sea.