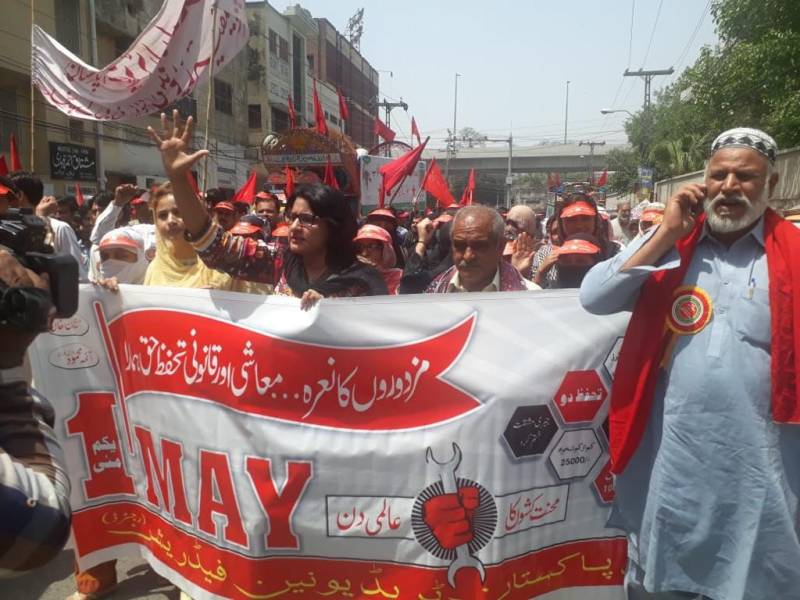 LAHORE - All Pakistan Trade Union Federation on Tuesday took out a rally from Hamdard Hall to Punjab Assembly to mark the May Day.

Led by APTUF leaders Sultan Khan, Aima Mahmood, Fazl Wahid, MunirDogar, Nasir Mahmood, Salma Liaqat and others, the participants of the march raised slogans in favour of their demands and vowed to continue the struggle for the working class of the country.

They were holding banners and placards inscribed with different slogans, condemning the rising inflation, poverty and unemployment and government reluctance towards the implementation of labour laws. They shouted slogans against forced labour and exploitation of women workers at workplaces.

Addressing the workers, APTUF General Secretary Aima Mahmood said the government lacked vision and planning to provide employment to youth and women and rulers only made tall claims about it. The labour class, she said, were facing worst exploitation at workplaces due to wrong policies of the government. Saying that 73 percent labour in Pakistan working in informal sector, MsAima demanded social and legal protection mechanism for them. She demanded amendment in Factory Act 1934, and emphasized the need for participation of women in labour unions and their proper intake in the decision-making process. The government, she said, should avoid taking dictations from international lending agencies to run the economy instead it should consider the interest of poor and middle class and workers.

APTUF Chairman Sultan Khan stressed the unity among different labour unions, asking them to put behind their minor differences for the great cause. He said every worker should be provided social security and workers welfare fund. He said the government should announce Rs25,000 minimum wage of labourer.

APTUF President Fazl Wahid said the Railways development was not possible without the welfare of rail workers. But, he regretted, the government was not willing to address their demands and they were kept away from the decision making process.

APTUF leaders MunirDogar, Nasir Mahmood, Salma Liaqat and SafiaBibi also addressed the workers. They demanded raise in their salaries, implementation of labour laws, labour inspection of industrial units as per ILO Convention, protection of labour rights as per GSP Plus rules, end to forced labour and representation of labour class in national and provincial assemblies.