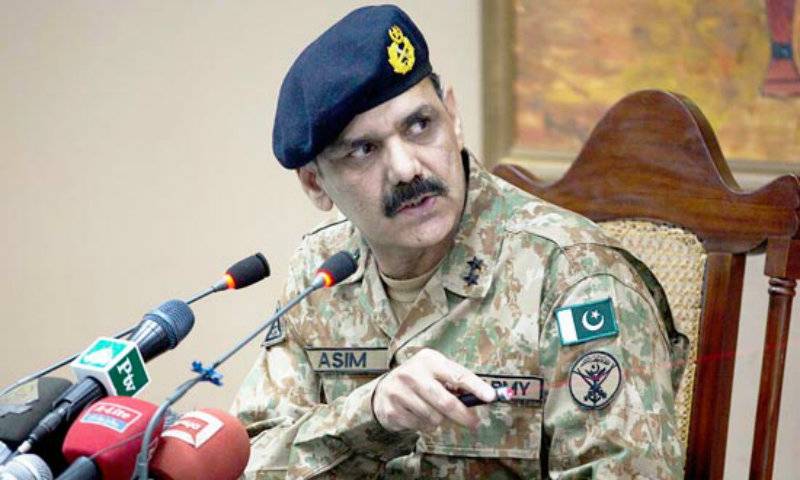 RAWALPINDI - Indian interference in Pakistan has been proven and the whole network was unveiled with the arrest of Indian spy Kulbushan Yadav, said Director General ISPR Lt-General Asim Saleem Bajwa on Thursday.

Addressing a press briefing in Rawalpindi, Bajwa informed the reporters about the major goals achieved by the law enforcement agencies during the last two years, asserting that the anti-terrorism operation was indiscriminate as there has been no concept of good or bad Taliban.

He said that terrorists of many nationalities, including Pakistanis, Afghans, Uzbaks, Arabs and Europeans have been killed in the operation Zarb-e-Azb. "We have cleared the North Waziristan through our sacrifices," he added.

The Army spokesman said that as many as 311 IED blasts, 74 attacks, and 26 suicide blasts had taken place in 2014 which pushed the military leadership to immediately begin the anti-terrorism operation. All of the concerned institutions, stakeholders and Afghanistan were informed about the operation in advance.

"Now, almost all of the areas have been cleared and only few pockets have left where the military operation is still underway. The current focus of the Zarb-e-Azb is to secure our border with Pakistan, which is over 2,600kms long and has 18 entry points," he explained.

The head of the military’s media wing Lt-Gen Asim Bajwa also clarified the Pakistan Army did not play any favourites during the ongoing Operation Zarb-e-Azb.

Bajwa also shared details regarding the operation and the presence of Islamic State in the country.

He informed that 537 personnel embraced martyrdom, while 2272 others injured during Operation Zarb-e-Azb.

He underlined that Pakistan and Afghanistan have 18 crossing points, and gates will be constructed there as part of a security measure.

Bajwa added that the network of terrorists in Khyber Agency has been dismantled.

Talking about the situation of the port city, DG ISPR said that Karachi has now become a peaceful city. “Police and Rangers are working on the front line there.”

When asked to comment on Muttahida Qaumi Movement chief Altaf Hussain’s recent hate speech, Bajwa said: “No Pakistani will accept anti-state talk by a person who is sitting in a foreign country.”