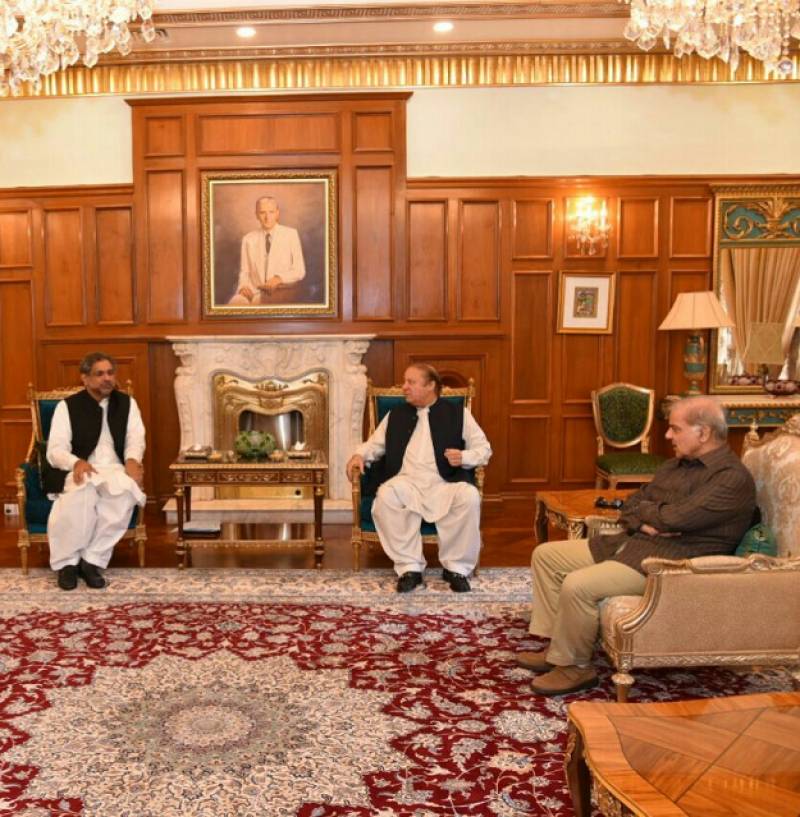 ISLAMABAD: The oath-taking ceremony of the new federal cabinet on Wednesday has been delayed after Pakistan Muslim League-Nawaz (PML-N) failed to decide the nominees for ministerial portfolios.

Incumbent Prime Minister Shahid Khaqan Abbasi in a press conference said that the government's incoming cabinet would take oath in a couple of days.

"Consultations are underway and the cabinet will hopefully take oath in one to two days," Abbasi said while speaking to journalists in Murree, following a high-level PML-N meeting chaired by ousted prime minister Nawaz Sharif.

According to sources, PM Shahid Khaqan Abbasi’s cabinet was expected to sworn-in at the Presidency at 5:30 pm on Wednesday but the event was delayed as the ruling party could not reach a decision with regard to allotment of ministerial portfolios among the nominees.

The meeting began with the exchange of pleasantries with Abbasi. The newly incumbent premier thanked the ruling Pakistan Muslim League-Nawaz supremo for reposing confidence in him to succeed him.

The attendees discussed the prevailing political situation in the country besides consulting over the formation of the new federal cabinet, sources said.

The sources said that no drastic changes were expected in the new federal cabinet. However, Chaudhry Nisar Ali Khan has refused offers made by the incumbent prime minister to continue as the interior minister, sources disclosed.

The informed sources further said that Punjab Chief Minister Shehbaz Sharif will resign before NA-120 by-polls campaign for a National Assembly seat to be elected as permanent Prime Minister while Nisar is expected to be given the post of foreign minister in that cabinet.

The Pakistan Muslim League – Nawaz (PML-N) leadership is also contemplating over nominating Shehbaz to contest from two other national seats along with Lahore’s NA-120 constituency, sources further said. However, Shehbaz is keen to contest the by-polls from NA-120 constituency (Lahore) which was vacated after Nawaz Sharif’s disqualification as the premier by the apex court last week.

A five-judge Supreme Court bench disqualified Nawaz Sharif as prime minister on July 28 in a unanimous verdict in the Panamagate case, thus cutting short his third stint in power.

Soon after the court judgement, the PM House in a terse statement said that Nawaz Sharif, despite having reservations on the court’s verdict, has stepped down from his post as the premier.

Shahid Khaqan Abbasi, the candidate of ruling PML-N won the election for PM with 221 out of 342 members of the National Assembly on Tuesday.