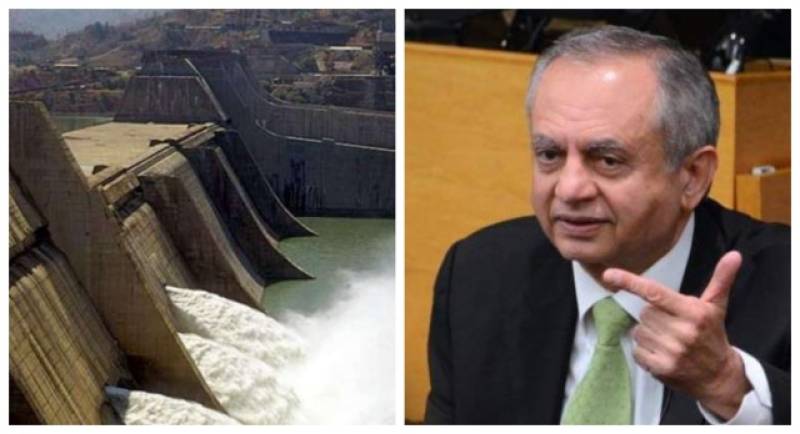 ISLAMABAD – The Adviser to Prime Minister on Commerce, Textiles, and Industries, Abdul Razak Dawood had dissociated himself from all his business ventures before joining the federal cabinet of present government, a statement issued by his office said Wednesday.

"On joining the cabinet, the advisor has totally distanced himself from his former business interests and has scrupulously observed and implemented all requirements of transparency and avoidance of conflict of interest," the statement said.

The clarification follows a massive criticism over the contract award for the construction of the Rs300 billion Mohmand dam project to a joint venture of China Gezhouba, Descon and Voith Hydro.

China Gezhouba has 70 per cent share in the project while Descon — the company owned by Razzaq Daud, the prime minister’s adviser on commerce and industry — and Voith Hydro have 30 per cent combined.

Referring to the news items related to award of contract of Mohmand dam project, the statement from the PM’s adviser office said Abdul Razaq Dawood founded and headed Descon Engineering Limited, as he did several other business ventures.

“When asked to serve the present government, Abdul Razak Dawood fully disclosed all his business associations to the prime minister and to ensure transparency and avoid conflict of interest, he resigned from all these associations before joining the cabinet. His disclosure and resignations were provided in writing to the prime minister with the request that these be fully shared with the cabinet.

“The disclosure had also identified the Mohmand dam project for which Descon had already bid before Abdul Razak Dawood joined the cabinet. The prime minister felt that this pending project should not prevent Abdul Razak Dawood from joining the cabinet. In fact, the prime minister made a strong plea for the services of the advisor for commerce, textile, industries and production and investment,” the statement read.

“It is for WAPDA to comment on the bidding process leading to the successful bidder with its extensive experience in tendering for projects in and outside Pakistan, the Mohmand dam bids arranged by WAPDA were processed as fully compliant with national and internationally-accepted ICB bidding procedures,” it added.

‘Construction contract made on merit’

On his part, the chairman of Water and Power Development Authority (Wapda), Lt Gen (r) Chairman Muzammil Hussain Hussain Wednesday dispelled the impression regarding any favoritism in awarding contract to CGGC-DESCON for construction of Mohmand dam.

“Some speculative comments about the contract are baseless since the entire process has been undertaken with utmost transparency and without any favour or fear. WAPDA takes pride in its best practices and has the confidence of international donors for any commercial financing.

“International bidding for eligible firms or joint ventures (JVs) was invited for procurement in accordance with PPRA and PEC provisions for the project. About 23 firms purchased the bids while two JVs submitted their bids," he added.

He further said, “Technical bids were opened on June 26 in presence of JVs. The bids were evaluated by a consortium of consultants including NESPAK, SMEC (Australia) and ACE and CGGC-DESCON was declared responsive.”

Pre-award technical negotiations were underway and after finalisation of the evaluation process, the contractor was likely to be mobilized by another 10 weeks by mid-March, he added.

WAPDA, by using its own capability, would kick off the work in second week of January, including Geotech boring, establishment of seismic station as well as weather station and preparation of camp site for optimum utilization of low flow period from January to May.

According to Wapda chairman the construction work would provide job opportunity to 6,000 local people, and provide clean drinking water to whole Peshawar city. As per agreement, 40 percent workforce would be haired from Pakistan.

To a question, he said the work on the dam would be completed in five years and eight months with an estimated cost of Rs309 billion. The dam would have capacity to store about 1.2 million acre feet water and generate 800 mw electricity, he added.

The dam would be helpful in irrigating thousand of acres of land in Khyber Pakhtunkhwa. Initial land acquisition in area had been completed with cooperation of local elders and administration.

Meanwhile, at a press conference, Minister for Water Resources Faisal Vawda said ground breaking ceremony of much awaited Mohmand dam project would be held on January 13.

Dispelling the impression about any favoritism in awarding contract to CGGC-DESCON for construction of Mohmand dam, he clarified that the contract was awarded to the company before the inception of Pakistan Tehreek-e-Insaf government.

“Neither WAPDA, nor any minister can award contract to any company,” he said and added speculative comments about the contract were totally baseless as the entire process had been undertaken with utmost transparency and without any favour or fear.

ISLAMABAD – Pakistani reporters staged a walkout from a press conference by Federal Minister for Water Resources ...

The construction of 54-year-old Mohmand dam project is said to be imperative to overcome the problems of water shortage and electricity shortfall in the South Asian country. A sum of Rs2 billion has already been allocated for the dam project in the Public Sector Development Programme 2018-19.

The Supreme Court, while issuing a detailed verdict in the case pertaining to acute water scarcity in Pakistan last year, said “the need for water reservoirs is not only expedient but also sine qua non (an essential condition) for the survival of the people and economy of Pakistan”.