India returns body of Pakistani prisoner, who was stoned to death in Jaipur jail 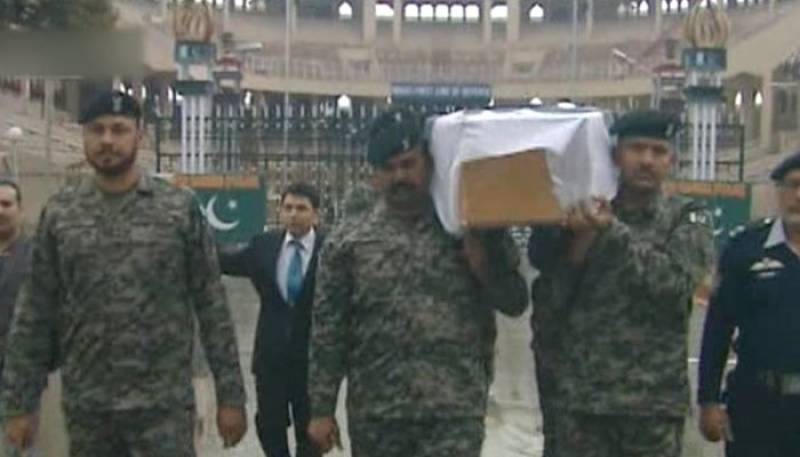 LAHORE - The body of the Pakistani prisoner, who was stoned to death by Indian inmates in Rajasthan’s Jaipur Central Jail last month, handed over to Pakistan at Wagha border on Saturday.

Shakirullah, who belonged to the Pakistani city of Sialkot, was first brutally tortured and then stoned to death by his fellow Indian prisoners at the Jaipur Central Jail on Feb 20.

He had been in the Indian jail since 2001, and reportedly was being held on charges of espionage.

The killers had decided to kill the Pakistani inmate in protest against the February 14 Pulwama attack, according to reports in the Indian media.

Pakistan had lodged its protest with India after the inspector general of police (IG) for Rajasthan and in-charge of prisons Kapil Garg confirmed the news of his Shakirullah's murder.

The Pakistani prisoner had been eight years into a life term when he was attacked at the Jaipur central jail. He was stoned to death following a quarrel, Garg told media.

Shakirullah’s brother, Gulfam while speaking to The Express Tribune said that he has spent sleepless nights after receiving the news of his brother’s murder, adding that the family awaits the return of his body to see him one last time.

Gulfam had appealed to the government to contact the Indian government and arrange the repatriation of his brother’s body.

NEW DELHI – A Pakistani prisoner has been found dead after being brutally tortured by other inmates lodged at a jail ...

The security for the Pakistani prisoners kept in various jails in India has been beefed up after Shakur’s death. They have been kept in separate barracks, in distance with other prisoners.

The security has been specifically been beefed up for the Pakistani prisoners at Jodhpur, Jaipur and Rajasthan jails.

Pakistan on Friday handed over Indian pilot Abhinandan Varthaman to Indian authorities at the Wagah border crossing as a "peace gesture" to de-escalate the rising tensions between the two South Asian neighbouring countries.