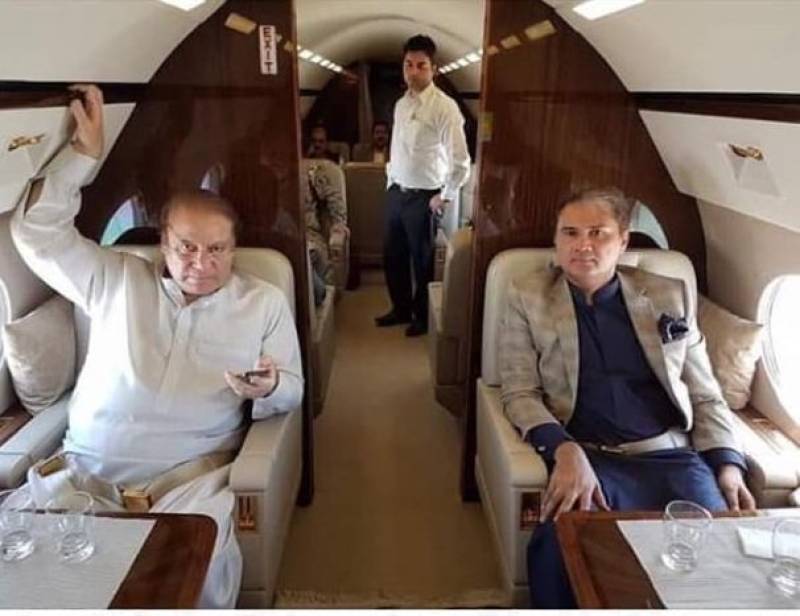 A cyber crimes court refused to grant pre-arrest bails to both the suspects who had appeared before the court along with their legal counsel.

Judge Tahir Mehmood conducted the hearing of the case and the Federal Investigation Agency (FIA) was represented by its prosecutor. The FIA counsel presented the investigation report, which was earlier submitted in the Supreme Court.

During the hearing, Janjua's counsel contended that FIA's report stated that the plan to record the video - regarding the discussion on Al-Azizia steel mills reference - was made by Nasir Butt and that his clients had nothing to do with it.

To this, Janjua's lawyer said there is nothing in the report 'that says that my client has been accused of anything.'

The lawyer argued that no evidence was produced against both the suspects and they were nominated by judge Malik.

Janjua's lawyer continued that if his clients were granted bail, they would join the investigation and prove their innocence.

ISLAMABAD - The recently removed Accountability Court Judge Arshad Malik has claimed that he was offered a Rs500 ...

He further contended that the suspects nominated in the first information report, which was lodged for making the controversial video public, did not include Janjua or Yousuf's name.

However, the court rejected the bail pleas of both suspects, following which they were arrested by the FIA.

Besides Janjua and Yousaf, Ghulam Jilani, who has been nominated in the case, was also arrested.

On the other hand, a civil court judge extended the judicial remand of Mian Tariq Mahmood; Mehmood is accused of showing judge Malik a 'compromising video' to blackmail him, by 14 days.

The former accountability court judge, Arshad Malik has been at the centre of controversy after PML-N Vice President Maryam Nawaz alleged in July that he had been blackmailed into giving the verdict against Sharif.

According to judge Malik's affidavit, Tariq Mahmood, an old acquaintance of his, had been the one to show him a secretly recorded manipulated immoral video [showing him] in a compromising position.

The judge claimed that this video was later used by Sharif's long-time supporter Butt to blackmail him. The judge had admitted that he met Nasir Janjua at the residence of former premier Nawaz Sharif in Jati Umra.

The judge was removed after the scandal surfaced.

The judge, in his affidavit, revealed a meeting that took place in early 2018, wherein an acquaintance named Nasir Janjua associated with the PML-N, “implored” him to issue verdicts of acquittal in the Al-Azizia and Flagship references.

The judge quoted Janjua as saying that it was on his personal recommendation that he [Malik] was appointed as judge in the accountability court adding that during the arguments stage of the references’ trial, he was again approached by Janjua with a “financial offer” from Nawaz of Rs100 million but that he refused the offer.